Here's Why You Should Invest in AngioDynamics Stock Now

AngioDynamics Inc. (ANGO - Free Report) has been gaining investor confidence on continued impressive results. In a year’s time, the stock has rallied 31% compared with its industry’s and the S&P 500’s 11.1% and 2.9% growth, respectively.

Furthermore, AngioDynamics exited the second-quarter fiscal 2019 on a solid note, with earnings and revenues beating the Zacks Consensus Estimate. The company continues to benefit from its core Oncology business unit, courtesy of its strong NanoKnife business.

With solid prospects, this Zacks Rank #2 (Buy) stock is an attractive pick for investors at the moment.

What’s Working in Favor of the Stock?

NanoKnife is one of the major products, which has been providing a boost to the Oncology business of AngioDynamics. The product has previously received the FDA clearance for the surgical ablation of the soft tissue. The system utilizes low-energy direct current electrical pulses to permanently open pores in target cell membranes.

In 2018, the NanoKnife System was granted Expedited Access Pathway (“EAP”) designation by the U.S. FDA. It is proposed that the upgraded system will be used for the treatment of Stage III pancreatic cancer. Management also confirmed that the company is looking forward to an IDE approval from the FDA. Meanwhile, the FDA has given a Category B designation to the NanoKnife comprehensive study of Phase III pancreatic cancer. 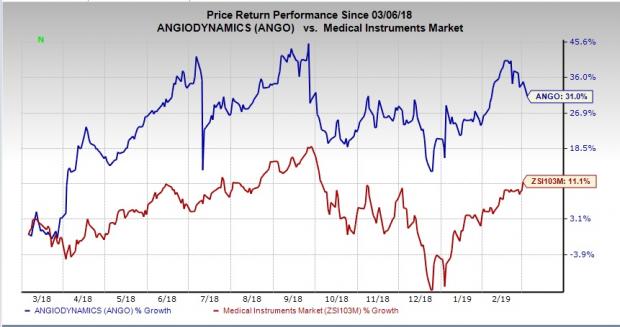 In the second quarter of fiscal 2019, NanoKnife revenues grew 29.1% year over year on increasing global adoption of the technology.

For fiscal 2019, AngioDynamics continues to expect revenues in the range of $354-$359 million. Adjusted earnings per share are expected between 82 cents and 86 cents. Free cash flow is projected within $26-$31 million for the fiscal year.

The Zacks Consensus Estimate for fiscal 2019 earnings is pegged at 86 cents, reflecting a 16.2% growth. The same for revenues stands at $359.1 million, indicating a 4.3% rise year over year.

Want More From the Industry?

IDEXX Laboratories delivered a positive earnings surprise in each of the trailing four quarters, the average being 7.2%.

Hawaiian Holdings (HA) Down in Yesterday's Trading: Here's Why