What's Next for Apple (AAPL) Stock After Earnings as iPhone Sales Fall Again?

Apple AAPL shares surged nearly 5% Wednesday after the company reported better-than-expected quarterly financial results after the closing bell on Tuesday. Despite the positivity on the back of Services strength, Apple is still an iPhone company and sales of its flagship product look poised to fall again. So, let’s see what might be next for Apple with its stock already up 33% in 2019.

Apple posted adjusted second-quarter fiscal 2019 earnings of $2.46 per share. This topped our $2.37 per share Zacks Consensus Estimate but still marked a roughly 10% decline from the year-ago period. Tim Cook’s company also surpassed our top-line estimate even though revenue fell 5.1% to $58.02 billion—worse than Q1 2019’s 4.5% decline.

More specifically, product sales, which accounted for 80.3% of total revenue, fell 9.2%. On top of that, revenue in Greater China tumbled 21.5% from the year-ago quarter to $10.22 billion, which did mark an improvement from last quarter’s 27% drop off in the world’s second-largest economy that includes Hong Kong and Taiwan. Meanwhile, iPhone sales tumbled 17.3% from $37.56 billion in the prior-year quarter to $31.05 billion. Last quarter, iPhone revenue fell 14.9%.

Clearly, there doesn’t seem like much reason to celebrate here aside from slightly better-than-expected top and bottom-line results. Therefore, Apple executives seemed to have been able to successfully turn Wall Street’s attention to its growing Services business, at least for now. 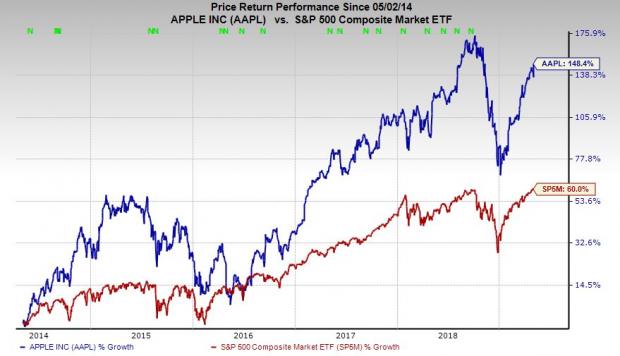 Apple’s Services sales popped 16.2% to reach $11.45 billion and account for nearly 20% of total quarterly revenue. Apple and Cook have focused on the company’s Services unit, which includes its quickly-growing Spotify SPOT competitor Apple Music and more, over the last year. “Our March quarter results show the continued strength of our installed base of over 1.4 billion active devices, as we set an all-time record for Services, and the strong momentum of our Wearables, Home and Accessories category, which set a new March quarter record,” Apple’s CEO said in prepared remarks.

“We delivered our strongest iPad growth in six years, and we are as excited as ever about our pipeline of innovative hardware, software and services. We’re looking forward to sharing more with developers and customers at Apple’s 30th annual Worldwide Developers Conference in June.”

It is every good chief executive’s job to put a positive spin on things. With that said, Apple’s services sales growth came in below last quarter’s 19% expansion. Plus, the strength of both the Wearable and iPad units shows just how much iPhone and China truly matter.

Investors should note that some of Apple’s newest Services have yet to launch or have any impact on sales. Apple unveiled at a March 25 event some of its plans for a more robust Services future to further monetize its 1.4 billion active devices, which includes 900 million iPhones.

As we touched on at the top, shares of Apple popped following its earnings release and are now up over 33% this year to crush the S&P 500’s 17% climb. Thanks to Apple’s huge late-2018 selloff, AAPL stock rests approximately 10% below its 52-week intraday high to give Apple even more room to run.

In the end, Apple investors were likely pleased to see Apple raise its dividend by 5%. AAPL is also trading just above its industry’s average at 16.6X forward 12-month Zacks Consensus EPS estimates, which is not too far off its five-year median of 14.1X. However, Apple’s full-year earnings are projected to slip 4.7% on the back of a 4.4% revenue decline. Plus, iPhone sales are projected to sink roughly 13% in the current quarter, based on our NFM estimates.

Clearly, Apple is still a strong company despite its near-term sales outlook. But Apple will likely have to post sales growth that looks more like Microsoft MSFT sooner than later if it wants Wall Street to treat it like a more diversified tech company and not just an iPhone maker.