Barring one-time items, adjusted earnings per share were 46 cents in the quarter, down from 96 cents a year ago. The figure surpassed the Zacks Consensus Estimate of 41 cents.

Revenues were $2,034 million, down around 11% year over year. Also, it missed the Zacks Consensus Estimate of $2,104 million. The company witnessed lower sales across its businesses in the quarter.

Advanced Materials: Revenues in the unit decreased around 3% to $272 million due to lower average selling prices.

Textile Effects: Revenues in the division were down roughly 6% to $189 million. Results were impacted by lower sales volumes that more than offset higher average selling prices. Volumes were affected by reduced demand as a result of uncertainties surrounding the U.S.-China trade conflict.

The company repurchased around 1.5 million shares worth roughly $34 million in the quarter.

Going forward, Huntsman said that it will continue to execute its strategy to expand its downstream businesses through strategic investments, new products and continued globalization of recent bolt-on acquisitions. The company will also continue its balanced approach to capital allocation including share buybacks.

Huntsman's shares have lost around 26.6% in the past year compared with the industry’s 24.1% decline. 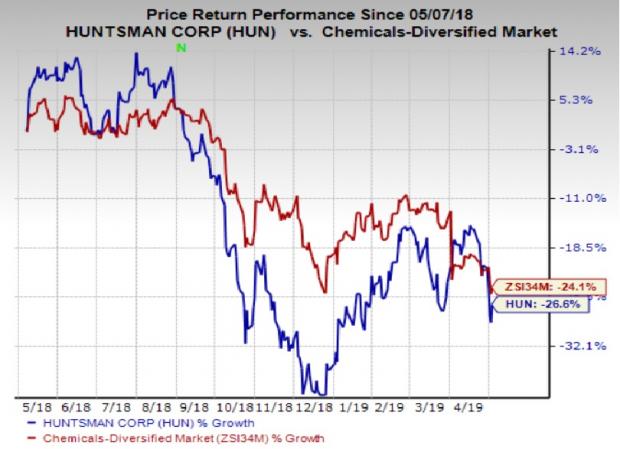 Sandstorm Gold has an expected earnings growth rate of 200% for the current year and carries a Zacks Rank #1 (Strong Buy). The company’s shares have gained around 9% over the past year. You can see the complete list of today’s Zacks #1 Rank stocks here.

Flexible Solutions has an expected earnings growth rate of 171.4% for the current year and carries a Zacks Rank #2 (Buy). Its shares have rallied roughly 108% in the past year.

Israel Chemicals has an expected earnings growth rate of 13.5% for the current year and carries a Zacks Rank #2. Its shares have gained around 14% in the past year.

Albemarle (ALB) to Report Q1 Earnings: What's in the Offing?