Adjusted loss from continuing operations amounted to 41 cents per share, wider than the Zacks Consensus Estimate of a loss of 22 cents. Also, the bottom line compares unfavorably with the year-ago quarter’s earnings of 14 cents.

Persistent decline in fluid milk consumption and high raw milk costs were the main deterrents. In fact, raw milk costs rose 8% year over year but declined 1% on a sequential basis.

Net sales declined nearly 9.3% to $ 1,795.4 million and missed the Zacks Consensus Estimate of $1,896 million. Volumes in the quarter continued to decline year over year, due to customer exits and category declines. Per the USDA results, fluid milk category dropped 1.2% through February on a quarter-to-date basis.

Dean Foods ended the quarter with cash and cash equivalents of $22.5 million, long-term debt (including current portion) of approximately $1,009.6 million and shareholders’ equity of $256.1 million. Total debt outstanding (net of cash in hand) was nearly $991 million as of Mar 31, 2019.

In the first quarter, the company used nearly $72 million of net cash for operating activities. Capital expenditures in the quarter amounted to nearly $27 million.

Management stated that the company is on track with growth efforts such as right-sizing the cost structure, innovations and integrating operations. To induce greater financial agility, the Zacks Rank #3 (Hold) company is focusing on an enterprise-wide cost productivity plan that entails optimizing supply chain operations and spending. It is progressing with brand-building initiatives as well as bolstering logistics and distribution capabilities.  Moreover, as stated earlier, the company is on track with exploring strategic alternatives for its business. 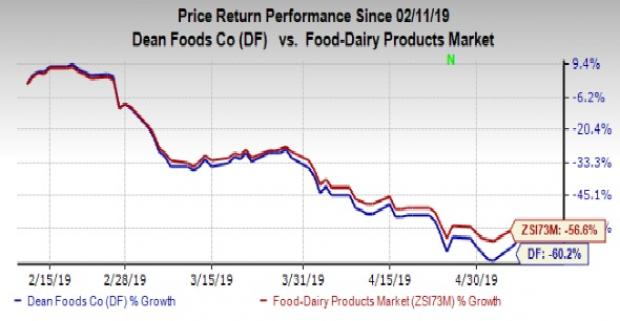 The company’s shares plunged 60.2% in the past three months compared with the industry’s slump of 56.6%.