ArcelorMittal (MT - Free Report) recorded lower profits in first-quarter 2019. The company generated net income of $414 million or 41 cents per share, down from $1,192 million or $1.17 in the year-ago quarter. The results were impacted by higher raw material costs and lower steel prices.

Barring one-time items, adjusted earnings per share (EPS) came in at 53 cents, which missed the Zacks Consensus Estimate of 88 cents.

Total sales rose modestly to $19,188 million in the quarter from $19,186 million in the year-ago quarter. The figure beat the Zacks Consensus Estimate of $18,825 million.

Net cash from operating activities amounted to $971 million compared with $160 million in the year-ago quarter.

In 2019, ArcelorMittal anticipates global apparent steel consumption (ASC) growth in the range of 1-1.5%, up from 0.5-1% growth expected earlier.

In the United States, the company projects ASC growth of 0.5-1.5% in 2019, unchanged from prior view. This is expected to be driven by persistent growth in non-residential construction and machinery.

In Europe, weak manufacturing and falling automotive production are expected to weigh on ASC growth. These factors are expected to contract ASC up to 1% in 2019, against rise of up to 1% expected earlier.

In Brazil, ASC is expected to rise 3-4%, down from 3.5-4.5% increase expected earlier. The downside is likely to stemming from weaker-than-expected economic growth early in 2019.

In China, the company expects overall demand to grow flat to 1% in 2019, up from a decline of -0.5% to -1.5% expected earlier. Real estate demand along with economic stimulus is expected to drive the upside.

The company expects to witness higher steel shipments in 2019 on year-over-year basis. Capital expenditure for the year is expected to increase to $4.3 billion from $3.3 billion in 2018.

ArcelorMittal’s shares have lost 46.5% in the past year compared with 33.6% decline of the industry. 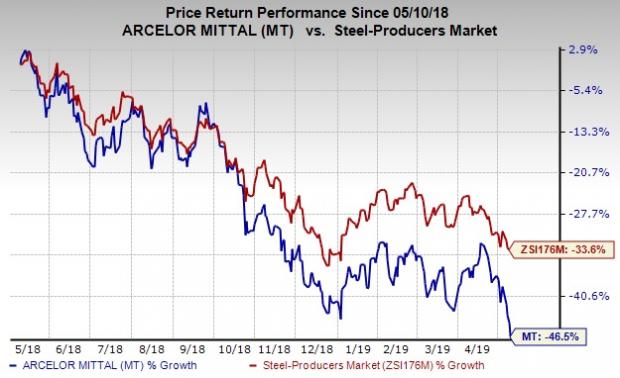 Materion has an expected earnings growth rate of 16.4% for 2019. The company’s shares have gained 25% in the past year.

Verso has an expected earnings growth rate of 7% for the current year. The company’s shares have appreciated 17.1% in a year’s time.