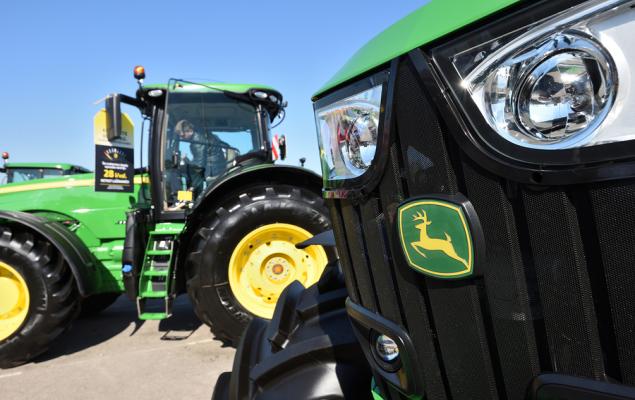 Deere & Company (DE - Free Report) reported second-quarter fiscal 2019 (ended Apr 28, 2019) adjusted earnings of $3.52 per share, missing the Zacks Consensus Estimate of $3.58 by a margin of 2%. However, the reported figure recorded an improvement of 12% from the prior-year quarter’s adjusted earnings per share of $3.14.

Ongoing concerns over the impact of the escalating trade war between the United States and China on U.S. exports of key commodities, weakening agricultural market and delayed planting season in much of North America are resulted in farmer’s getting cautious about their equipment purchases. Deere has this trimmed fiscal 2019 guidance. The company’s shares fell 5% in pre-market trading.

Including one-time items, the company had reported earnings per share of $3.67 in the prior-year quarter. There were no adjustments in the currently reported quarter.

Cost of sales in the reported quarter advanced 6% year over year to $7.8 billion. Gross profit in the reported quarter came in at $2.5 billion, reflecting year-over-year improvement of 4%. Selling, administrative and general expenses inched up 1% year over year to $947 million. Equipment operations reported operating profit of $1,366 million in the quarter under review compared with $1,315 million in the prior-year quarter. Total operating profit (including financial services) increased to $1,536 million from $1,494 million reported in the year-ago quarter.

Agriculture & Turf segment’s sales were up 3% year over year to $7.3 billion, primarily driven by higher shipment volumes and price realization offset by unfavorable currency-translation impact. Operating profit at the segment declined 4% year over year to $1,019 million, owing to higher production costs, and increased research and development expenses. These were partially mitigated by price realization and higher shipment volumes.

Net revenues at Deere’s Financial Services division totaled $886 million in the reported quarter, up 11% year over year. The segment’s operating profit came in at $170 million, a decrease of 5% year over year.

Deere trimmed fiscal 2019 guidance considering continued weakness in the agricultural sector.  Due to the company’s prudent management of field inventories, it anticipates production levels to be below retail sales in the second half of the year.

For fiscal 2019, Deere lowered expectation of equipment sales year-over-year growth to 5% from the prior expectation of 7%. The Wirtgen acquisition will contribute about 1% to net sales for the fiscal. The forecast also factors an unfavorable impact of 3% for foreign-currency translation for fiscal, higher than previous projection of an impact of 2%.

For the fiscal, the company now anticipates net sales to increase about 5% year over year, down from its previously guided growth expectation of 7%. The expectation for net income for the fiscal is now at about $3.3 billion compared with its earlier expected $3.6 billion.

The Construction & Forestry segment’s results will benefit from the addition of a full year of Wirtgen sales (adding 4% to its sales) compared with 10 months in fiscal 2018. The company anticipates generally positive fundamentals and economic growth worldwide. In forestry, global industry sales are expected to be flat to up 5% mainly on account of higher demand in EU28 countries and Russia.

For the Financial Services segment, results are expected to benefit from a higher average portfolio, partially offset by less-favorable financing spreads, higher provision for credit losses, and higher selling and administrative expenses.

Shares of Deere have lost around 6% over the past year, compared with the industry’s decline of around 7%.

DMC Global has an estimated earnings growth rate of 79.7% for the ongoing year. The company’s shares have soared 73%, in the past year.

Lawson Products has a stellar expected earnings growth rate of 24.5% for the current year. The stock has appreciated 60% in a year’s time.

Roper Technologies has a projected earnings growth rate of 7.9% for 2019. The company’s shares have gained 31%, over the past year.

Is TOTAL (TOT) a Worthy Stock for Value Investors?