Per the terms of the deal, Broadcom will provide Apple the required “radio-frequency (“RF”) front end components and modules” which can be utilized across iPhones, Apple watches, and iPads.

The extension of the agreement instilled confidence in the stock, evident from a surge of almost 4.1% in the intraday trading, eventually closing at 1.2% to $283.48. Notably, shares of Broadcom have returned 11.2% in the past year, outperforming the industry’s rally of 8.3%. 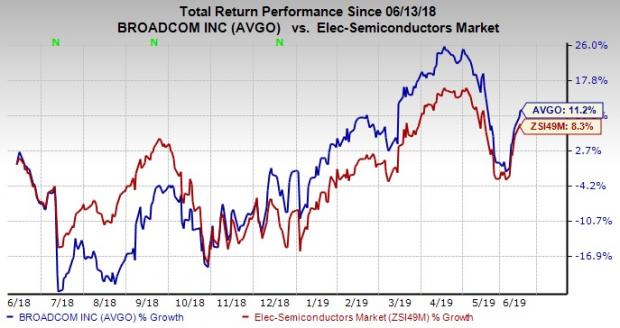 Apple’s strategy of a diversified supply base favoring Broadcom’s offerings bode well for the chipmaker.

Markedly, Broadcom competes with Qorvo (QRVO - Free Report) , a prominent Apple supplier, among others, in the RF components market. Shares of Qorvo were down 1.8% in the yesterday’s trading session.

Although, the financial terms of the deal have been kept under wraps, we may expect more information about the deal and its influence on outlook during Broadcom’s second-quarter fiscal 2019 earnings release scheduled on Jun 13.

Broadcom is benefiting from strong demand of wireless solutions and expanding product portfolio, which positions it well to address the needs of rapidly growing technologies like IoT and 5G.

The company’s Wireless Communications segment serves the smartphone market with products that include a broad variety of RF semiconductor devices, connectivity solutions and custom touch controllers.

Increasing clout of 5G, connected devices is fueling growth in RF devices market of which FBAR technology is an indispensable component, is a tailwind. Per a report from GrandViewResearch, RF components market is projected to hit $45.05 billion by 2025 at a CAGR of 14%.

A significant portion of Broadcom’s revenue comes from a handful of customers including Apple (counting sales to the contract manufacturer) which accounted for more than 25% of revenues in fiscal 2018. Notably, the exposure has increased considerably from the past year (20% in fiscal 2017).