Ford Motor Company (F - Free Report) made the announcement to recall 1.2 million Explorer sport utility vehicles in the United States because of a potential suspension link fracture issue, per Reuters. It is suspected that the glitch could lead to reduced steering control.

The affected vehicles include 2011-2017 Explorers that could experience a fractured rear suspension toe link that could increase the chance of crash. The recalled vehicles were manufactured in the Chicago plant between May 2010 and January 2017.

Frequent recalls for fixing faulty vehicles are concerns for Ford. Apart from elevating expenses for repairing faulty vehicles, recalls also hurt consumers’ confidence in a brand. In the last month, the second largest U.S. automaker made the announcement of recalling roughly 273,000 of Ford Ranger pickups and Fusion vehicles in North America. A transmission glitch can shift gears and roll away vehicles if the gear is not in the "park" mode. (Read more: Ford Announces Another Recall of 273K Units in North America)

Ford stated that $180 million costs, which will be incurred by its North America business unit, will be included in the second quarter. However, the company still expects 2019 adjusted earnings before interest and taxes to be higher than the same in 2018.

Over the past six months, shares of Ford have gained 18.4% against the industry’s decline of 5.4%. 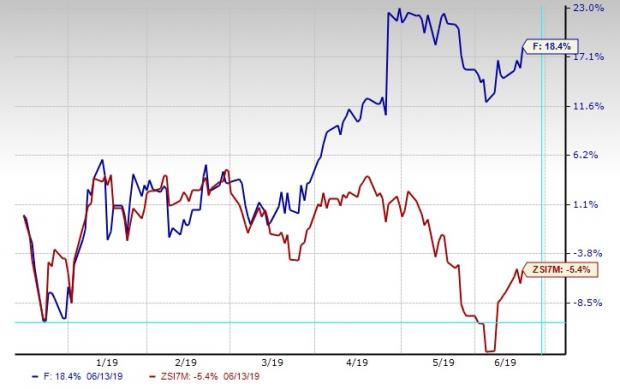 Allison has an expected long-term growth rate of 10%. Over the past six months, shares of the company have gained 2.6%.

Fox Factory has an expected long-term growth rate of 16.4%. Over the past six months, shares of the company have gained 19.5%.

Cummins has an expected long-term growth rate of 8%. Over the past six months, shares of the company have gained 22.8%.