It was a busy week for the biotech sector with drug approvals, collaborations and pipeline updates. Vertex Pharmaceuticals Incorporated VRTX and AMAG Pharmaceuticals, Inc. AMAG obtained FDA approvals for the treatment of Symdeko in children and Vyleesi in premenopausal women, respectively. Meanwhile, Conatus CNAT crashed on failure of yet another study on NASH candidate. The FDA also accepted Alexion’s ALXN application for label expansion of Ultomiris.

Vertex Gets FDA Nod for Symdeko in Children: Vertex Pharmaceuticals Incorporated announced that the FDA has approved Symdeko for the treatment of eligible cystic fibrosis patients as young as six years of age. With the latest approval, Symdeko can be prescribed to children with cystic fibrosis in the age group of 6 through 11 years who have two copies of the F508del-CFTR mutation or who have at least one mutation in the cystic fibrosis transmembrane conductance regulator (CFTR) gene that is responsive to Symdeko.

The drug, which was until now approved to treat patients 12 years and above, is now approved for eligible CF patients 6 years of age and older. Symdeko, a combination of the company’s other CF medicine, Kalydeco (ivacaftor) and tezacaftor/ivacaftor was Vertex’s third CF medicine to get approved in the United States in February 2018. The uptake of the drug has been strong since approval and the label expansion of the drug should further boost sales.

AMAG Wins FDA Approval for Vyleesi: AMAG Pharmaceuticals announced that the FDA has approved Vyleesi (bremelanotide injection) to treat acquired, generalized hypoactive sexual desire disorder (HSDD) in premenopausal women. Vyleesi autoinjector is the first treatment for this patient population that can be self-administered as needed in anticipation of sexual activity. The FDA approval is based on data from about 1,200 women in two phase III studies (RECONNECT). In both the studies, Vyleesi met the pre- specified co-primary efficacy endpoints of improvement in desire and reductions in distress as measured by validated patient-reported outcome instruments.

AMAG in-licensed Vyleesi from Palatin Technologies in February 2017. Palatin will get $60 million from AMAG for the approval plus additional payments for certain sales milestones and royalties. AMAG will also pay Palatin sales milestones based on escalating annual net sales thresholds, the first of which is $25 million, triggered at annual net sales of $250 million. The approval of this candidate will provide a big boost to AMAG as it caters to a huge unmet medical need for women.

Conatus Plunges on Drug Failure, Explores Alternatives: Shares of Conatus Pharmaceuticals plunged significantly after the company announced that a mid-stage study on lead candidate, emricasan failed. The phase IIb ENCORE-LF study on emricasan on patients with decompensated nonalcoholic steatohepatitis (NASH) cirrhosis failed to meet its primary endpoint. Consequently, the company is discontinuing further treatment of patients enrolled in the ENCORE-LF clinical trial. Conatus also announced results from the phase IIb ENCORE-PH study, which evaluated emricasan for a 24-week extension period. Although results were consistent from the initial 24-week treatment period, the study failed to meet predefined objectives. Earlier, the ENCORE-NF study, which evaluated emricasan for treating patients with biopsy-confirmed NASH and liver fibrosis, also could not achieve the primary goal as it lacked the desired effect on earlier-stage NASH fibrosis patients.

Additionally, Conatus announced that it is planning to explore and evaluate strategic alternatives to enhance its shareholders value. The company appointed independent investment bank and financial services company Oppenheimer & Co as its financial advisor to assist on the same. Conatus has also decided to reduce staff headcount by almost 40% as part of a restructuring plan and discontinue the development of its preclinical candidate, CTS-2090, which was being assessed for treating autoinflammatory diseases. Conatus updated its financial guidance and now expects 2019-end balance in the range of $10-$15 million.

Gilead Teams Up With Carna Biosciences: Gilead Sciences GILD entered a research and development collaboration with Japan-based biopharmaceutical company, Carna Biosciences Inc. The companies have collaborated to develop and commercialize small molecule compounds in immuno-oncology. The deal will also allow Gilead to access Carna’s proprietary lipid kinase drug discovery platform. Per the terms, the company will license worldwide rights to develop and commercialize inhibitors against an undisclosed immuno-oncology target from Carna. In exchange, Carna will receive an upfront payment of $20 million and be eligible to receive up to an additional $450 million in milestone payments. Carna will also receive royalties on future net sales.

Alexion's sBLA for Ultomiris Gets Priority Review: Alexion Pharmaceuticals announced that the FDA has accepted its supplemental biologics license application (sBLA) for its long-acting C5 complement inhibitor, Ultomiris (ravulizumab-cwvz), under a priority review for the treatment of patients with atypical hemolytic uremic syndrome (aHUS) to inhibit complement-mediated thrombotic microangiopathy (TMA). The regulatory body has set an action date of Oct 19, 2019. This sBLA was based on data from the phase III study on Ultomiris, conducted in complement inhibitor-naive patients with aHUS, which met its primary objective of complete TMA response. The drug is already approved in the United States for treating adult patients with paroxysmal nocturnal hemoglobinuria (PNH) to be administered every eight weeks.

The NASDAQ Biotechnology index lost 0.50% in the last five trading sessions. Among the major biotech giants, Celgene lost 4.08% in the period. Over the past six months, shares of Celgene have surged 49.10% whereas Biogen stock has lost 18.59%. (See the last biotech stock roundup here: Biotech Stock Roundup: Amgen Gets FDA Nod for Kanjinti, Regeneron Presents Data) 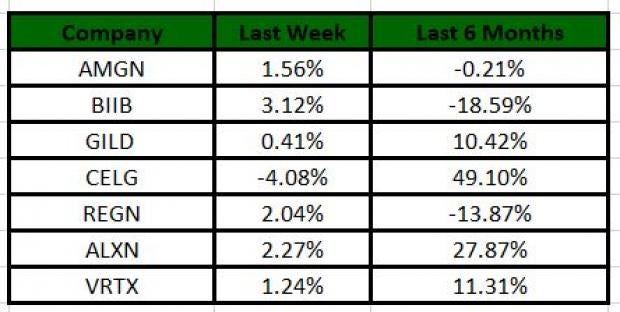