Ingersoll-Rand (IR) to Post Q2 Earnings: Beat in the Cards?

The company delivered average positive earnings surprise of 6.27% in the trailing four quarters, beating estimates all through. Notably, Ingersoll's first-quarter adjusted earnings of 89 cents per share outpaced the Zacks Consensus Estimate of 79 cents.

Over the past six months, the company’s shares have rallied 29.6% compared with 21.5% growth recorded by the industry it belongs to. 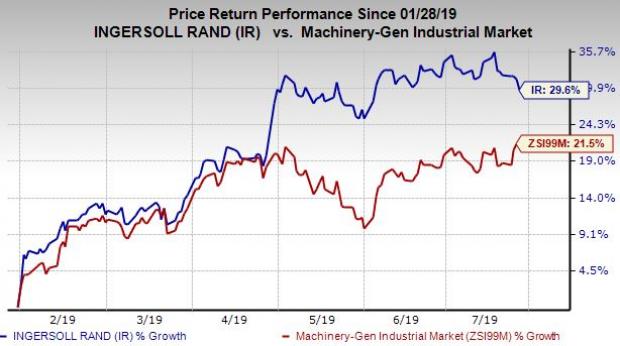 We expect the company to score an earnings beat in the second quarter as well.

Why a Likely Positive Surprise

Our proven model shows that Ingersoll has the right combination of the two key ingredients to beat earnings. A stock needs to have both a positive Earnings ESP and a Zacks Rank #1 (Strong Buy), 2 (Buy) or 3 (Hold) for this to happen. You can uncover the best stocks to buy or sell before they’re reported with our Earnings ESP Filter.

This is the case here as you will see below:

Earnings ESP: Ingersoll has an Earnings ESP of +1.40% as the Most Accurate Estimate is pegged at $2.08, higher than the Zacks Consensus Estimate of $2.05.

Zacks Rank: The company carries a Zacks Rank #2, which when combined with a positive ESP, makes us reasonably confident of an earnings beat.

Conversely, we caution against stocks with a Zacks Ranks #4 or 5 (Sell rated) going into the earnings announcement, especially when the company is witnessing negative estimate revisions.

Ingersoll is well positioned to benefit from strength in its end markets. The company’s commercial heating, ventilation and air conditioning (HVAC) business is expected to have gained from strong demand across North America and Europe in the second quarter. Also, strong bookings in residential HVAC business will be tailwinds. In addition, strength in industrial fluid management and compression technologies businesses in North America will bolster its quarterly revenues.

Here are some other companies in the Zacks Industrial Products sector that you may want to consider as our model shows that these have the right combination of elements to post an earnings beat this quarter: