Barring one-time items, adjusted earnings came in at $2.75 per share, missing the Zacks Consensus Estimate of $2.84.

LyondellBasell generated revenues of $9,048 million, down roughly 11.3% year over year. The figure also trailed the Zacks Consensus Estimate of $9,256.2 million.

Consolidated EBITDA declined around 21.4% year over year to $1,579 million.

In the Olefins & Polyolefins — Americas division, EBITDA fell around 5.4% year over year to $635 million. Olefin results rose by more than $150 million year over year. Polyolefins results dropped around $190 million, mainly due to a spread decline in polyethylene over ethylene.

The Olefins & Polyolefins — Europe, Asia, International (EAI) segment reported a decline in EBITDA of around 6.8% year over year to $331 million. Olefin results rose more than $30 million on a year-over-year basis due to margin improvement as ethylene price declines were outpaced by declines in feedstock costs. Consolidated polyolefins results declined around $25 million.

The Advanced Polymer Solutions (APS) segment’s EBITDA was $120 million in the second quarter compared with $121 million in second-quarter 2018.

EBITDA in the Intermediates and Derivatives segment declined around 30.2% on a year-over-year basis to $448 million. Propylene Oxide & Derivatives results were affected by decline in volume. Also, lower volume and margin across most products impacted Intermediate Chemicals results.

EBITDA in the Refining segment amounted to a loss of $66 million against profit of $104 million in the year-ago quarter. Crude throughput was relatively unchanged at 261,000 barrels per day.

The Technology segment’s EBITDA fell 5.3% year over year to $107 million.

LyondellBasell had cash and liquid investments of $1.9 billion at the end of the quarter.

The company launched a tender offer, which resulted in the repurchase of 35.1 million shares in July.

In July, the company witnessed persistent demand for the majority of the products, with consumer-based demand driving stable volumes in the Olefins & Polyolefins segments.

It anticipates low-cost natural gas liquid feedstocks to continue driving strong chain margin in the Olefins & Polyolefins Americas unit as well as Oxyfuels and Related Products business. Going forward, the company intends to start-up its Hyperzone HDPE plant during the second half of 2019.

Shares of LyondellBasell have lost 27.3% in the past year compared with the industry’s decline of 36.5%. 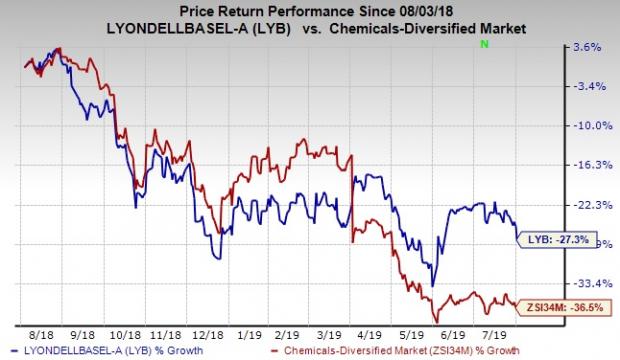 Kinross has projected earnings growth rate of 100% for the current year. The company’s shares have gained 30.3% in a year’s time.

Arconic has an estimated earnings growth rate of 38.2% for the current year. Its shares have moved up 14.8% in the past year.