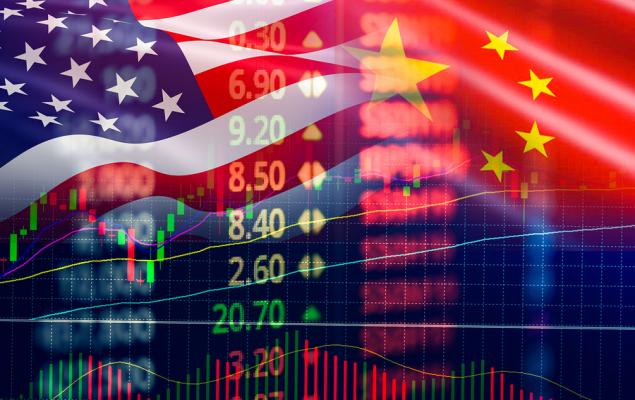 Read MoreHide Full Article
This was a crazy week in the markets with almost 1000 public companies reporting earnings, the Federal Reserve cutting rates, a jobs report, and now trade tensions heighten even further with Trump announcing an addition 10% tariff on $300 billion in Chinese goods.

The S&P 500 has fallen over 2.5% since 1:00 pm EST yesterday and the market’s ‘fear index’, the VIX, is up over 30% to its highest levels since May. Equity markets around the world are seeing sharp declines as this new tariff accentuates investor’s concern over the cooling global economy. Below is a 6-month chart of the VIX from the CBOE site.

Investors are flying from stock into the safety of treasury bonds causing interest rates to plummet. This additional tariff does not imply that a recession is inevitable as the market might have you guess. China may not be able to stand idle for long with this new set of tariffs tightening the noose.

As stock prices slide, so do valuations, causing some equities to look increasingly attractive. Your favorite blue-chip stocks are falling to discount levels.

Amazon has fallen 8% since its earnings release on July 25th with this recent tariff further accentuating the firm’s growth deceleration fears. Amazon isn’t as exposed to China as some of its brick-and-mortar competitors. AMZN could actually become more relatively valuable compared to its peers as the trade war ensues.

Amazon’s cloud segment, AWS, missed estimates in the earnings report last week, decelerating the growth of this segment quicker than expected. AWS is anticipated to be the primary growth driver moving forward. This larger than expected slowdown caused uneasy AMZN sentiment in the market.

Amazon has been struggling with short term costs due to its investment in one-day delivery domestically and internationally. Analysts are anticipating that Amazon’s high margin AWS cloud business will make up for the thinning margins in e-commerce. 70 to 80% of operating income is expected to be derived from AWS by the end of this year.

Prime Day was an enormous success, and the single largest event in Amazon history with sales surpassing Black Friday and Cyber Monday combined. Expect the benefits of this event to be reaped in Q3.

I believe that these short-term margin cuts will not affect the long-term growth of the company, and as AMZN’s price falls the buying opportunity ripens.

Disney has been on my radar ever since they announced the release of Disney+. I believe that this is going to be a massive win for the company with its international exposure and a seemingly endless stream of quality content.

Disney is set to launch Disney+, it’s streaming platform, on November 12th, and this is expected to shake up the streaming category. DIS surged 12% the day this platform was unveiled, while NFLX dipped 4.5%.

Disney closed its $71.3 billion acquisition of 21st Century Fox earlier this year. This was the final piece of the puzzle that Disney need to launch the Disney+ streaming platform. They will offer 90 years of quality content and are developing a number of TV shows that will be exclusively on Disney+.

This pivot has already started to thrust this reliable value stock back into growth, sending valuations surging. I expect that valuations will continue to grow as Disney+ gains traction domestically as well as internationally.

Analysts are estimating Disney+ will have 130 million subscribers in 5 years. This would rival Netflix’s 150 million users. International consumers are very familiar with the already globalized Disney brand. I believe that Disney+ will swiftly spread across the globe.

The Disney+ subscription will cost only $6.99 a month, which is almost half of Netflix’s basic HD plan. Analysts are predicting an 80% customer overlap with 20% of potential Disney+ customers not being interested in Netflix according to Raymond Jones.

I have been waiting for a buying opportunity in DIS since its Disney+ announcement. I think we are coming close to that point. DIS is trading right off its all-time highs at $141.50. I would look to put a position on as it dips into the $130s.

Google is one of those stocks that everyone wishes they could have gotten on the ground floor of and are continually looking for an opportunity to get in. This opportunity is fast arriving with the catalyst being the trade war.

Alphabet had a positive narrative in its 2nd quarter results. The firm was able to demonstrate a strong revenue beat driven by Other Google Revenue, which I hypothesize is growth in Google’s cloud segment. Management is giving the Google Cloud platform an annual topline run-rate of $8 billion.

YouTube is also growing fast with channels of 1 million+ subscribers being up 75% year-over-year. The company has also expanded its exposure of YouTube Music, and YouTube premium to now be offered in over 60 countries, which is a substantial increase from the 5 they had at the beginning of last year.

Regulatory headwinds remain a concern for the business and the antitrust probe that has been haunting these ad-driven firms is still in the back of investors’ minds.

GOOGL was up over 9% from the earnings report, but since then share prices have tumbled over 3% with Trumps new China tariff being the key catalyst.

I believe that Alphabet is lining up to be a buy with valuations on the lower side of its 5-year trend and growth deceleration concerns being tabled. GOOGL analysts have been increasing EPS estimates for the firm driving this stock into a Zacks Rank #2 (Buy).

I deem that the equity market could see further declines as we close in on the September 1st implementation date. These stocks I discussed above are ones that I have been looking to buy but hadn’t seen an opportunity (although GOOGL has been a good buy for the last couple of months). This new tariff and the ensuing trade war could be giving me and you a great opportunity. Look for more China-US trade discussion in the weeks to come.

5 Gold Mining Stocks Under $10 to Buy