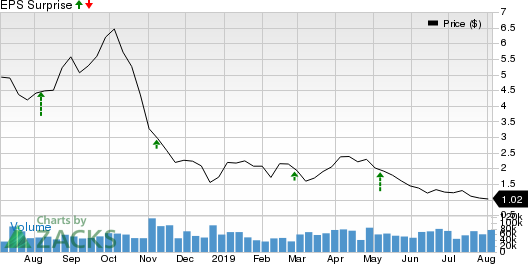 Which Way are Estimates Treading?

Let’s take a look at estimate revisions to get a clear picture of what analysts are thinking about the company before the earnings release.

The Zacks Consensus Estimate of 9 cents for second-quarter earnings has seen no upward movement but four downward revisions by firms in the past 30 days. This figure indicates a year-over-year decline of 30.8%.

The Zacks Consensus Estimate for revenues is pegged at $332.2 million for the to-be-reported quarter, indicating a fall of 14.2% from the year-ago reported figure.

Denbury Resources has a relatively low-risk business model as it produces oil by applying tertiary recovery techniques in mature fields. In this regard, its Cedar Creek Anticline and Tinsley Field Cotton Valley properties are expected to have created promising exploiting opportunities, which will be reflected in the to-be-reported quarter.

The Zacks Consensus Estimate for the company’s total production is pegged at 59 thousand barrels of oil equivalent per day (MBoe/d), suggesting a decline from the year-ago quarter’s 62 MBoe/d. The company has an oil-heavy portfolio (comprising 97% of the total volume in the last reported quarter). Notably, the West Texas Intermediate (WTI) crude price in second-quarter 2019 was lower than the year-ago period. In April, May and June, WTI averaged $63.86, $60.83 and $54.66 per barrel, respectively, per the U.S. Energy Information Administration. In comparison, WTI averaged $66.25, $69.98 and $67.87 per barrel in the year-ago respective months of 2018. The year-over-year decline in crude prices may hurt the company’s businesses.As such, revenues from oil sales are projected at $316 million, implying a fall from second-quarter 2018’s $373 million.

The effect of oil sales decline can be partially offset by other operations. The Zacks Consensus Estimate for revenues from CO2 sales and transportation fees is pegged at $8.6 million, pointing to improvement from the year-ago level of $6.7 million. Moreover, revenues from natural gas sales for second-quarter 2019 are anticipated at $2.30 million, indicating marginal growth from the year-ago level of $2.28 million. As such, the company’s bottom line is expected to fall 30.8% year over year.

What Our Model Unveils

Our proven model does not conclusively show that Denbury Resources is likely to beat the Zacks Consensus Estimate in the quarter to be reported. This is because a stock needs to have both a positive Earnings ESP and a Zacks Rank #1 (Strong Buy), 2 (Buy) or 3 (Hold) for this to happen. Unfortunately, this is not the case here as elaborated below.

We caution against Sell-rated stocks (Zacks Ranks #4 and 5) going into the earnings announcement, especially when the company is seeing negative estimate revisions.

Here are some companies from the energy space which, according to our model, have the right combination of elements to post an earnings beat in the upcoming quarterly reports.

Cheniere Energy, Inc. (LNG - Free Report) is set to report second-quarter 2019 earnings on Aug 8. The stock has an Earnings ESP of +88.46% and a Zacks Rank #2. You can see the complete list of today’s Zacks #1 Rank stocks here.

Callon Petroleum Company (CPE - Free Report) has an Earnings ESP of +0.84% and is a #3 Ranked player. The company is slated to release second-quarter 2019 earnings on Aug 6.