Including one-time items, earnings per share in the quarter came in at $1.20 per share compared with $1.25 recorded in the year-ago quarter.

In the reported quarter, International Flavors’ net sales were $1.29 billion, reflecting a year-over-year jump of 40%. However, the top-line figure missed the Zacks Consensus Estimate of $1.30 billion.

Revenues in the Taste segment decreased 4%, year over year, to $434.2 million during the April-June quarter. On a constant-currency basis, revenues edged down 1% year over year. Operating profit declined 11% year over year to $98 million.

Last October, International Flavors completed the acquisition of Frutarom Industries Ltd. The Frutarom segment’s revenues came in at $381.7 million and operating profit was $37 million during the quarter.

On Aug 5, International Flavors’ board increased its quarterly dividend by 3% to 75 cents per share. The dividend is payable on Oct 4, to shareholders of record as of Sep 23, 2019.

Over the past year, International Flavors’ shares have gained 7.7%, outperforming the industry’s growth of 1.7%. 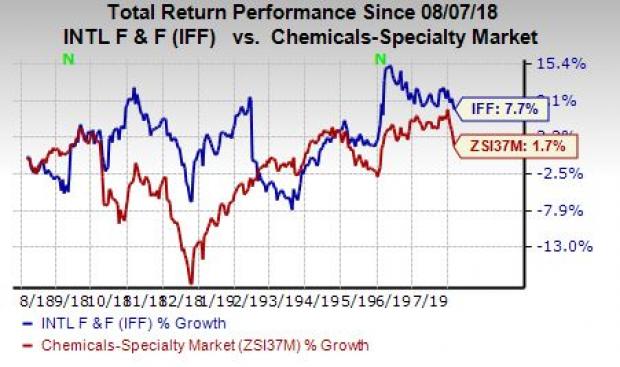 Alamos Gold has a projected earnings growth rate of a whopping 260% for the current year. The company’s shares have gained 35.6% in a year’s time.

Arconic has an estimated earnings growth rate of 38.2% for the ongoing year. Its shares have moved up 12.2% over the past year.