What to Expect from Alibaba (BABA) Earnings as U.S.-China Trade War Escalates

Alibaba BABA stock has lagged slightly behind the broader e-commerce industry in 2019. Despite some of its recent struggles over the last two years, Alibaba’s growth prospects remain relatively strong as it expands its cloud computing reach similar to its U.S. counterpart Amazon (AMZN - Free Report) .

The Chinese e-commerce power has clearly been impacted by the prolonged trade war between the U.S. and China, both in terms of real growth and overall investor fear.

The S&P 500 got off to a rough start in August as the broader market fell as the trade war ramped up yet again. President Trump said the U.S. would impose 10% tariffs, starting on September 1, on roughly $300 billion in Chinese goods that aren’t currently subject to tariffs.

The President went on to call China a “currency manipulation.” Beijing then said that Chinese companies will suspend purchases of U.S. agricultural products. At this point, there doesn’t seem to be a clear end in sight to the U.S.-China trade battle. And this uncertainty will hover over the global economy and companies like Alibaba until some resolution is reached.

What’s Going on with Alibaba

Alibaba operates the two largest e-commerce platforms in China. Alibaba’s core digital commerce business, highlighted by Taobao and Tmall, accounted for roughly 85% of the company’s quarterly revenue in Q4 fiscal 2019. As we mentioned, Alibaba has beefed up its cloud computing business in order to try to compete with the likes of Microsoft MSFT and Google GOOGL. This unit accounted for 8% of total sales last quarter after it climbed 76% from the prior-year period.

On top of retail and cloud, BABA has expanded its digital media and entertainment businesses. This includes deals with Disney DIS and others that helped the division account for nearly 6% of Q4 revenue. Plus, Alibaba’s annual active consumers on its Chinese retail marketplaces climbed by 102 million over the past year to reach 654 million. Mobile monthly active users touched 721 million, up 104 million over March 2018.

Despite Alibaba’s growth and diversification, BABA shares are up just 1% over the last two years, which falls far behind its industry’s 18% climb. Alibaba stock has outpaced the e-commerce market during the past 12 months, but it is still down 10%. At $159.10, shares of BABA closed up 1% in regular trading Wednesday to rest roughly 19% below their 52-week high of $195.72 a share. 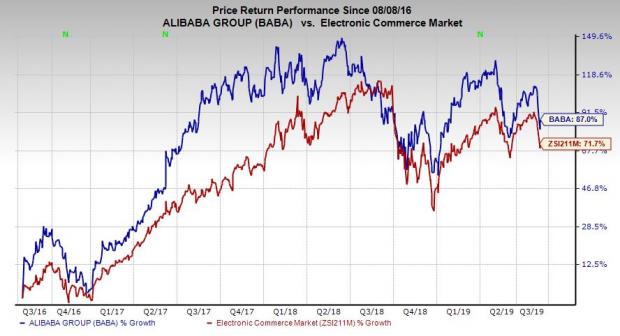 Moving on, our current Zacks Consensus Estimates call for Alibaba’s revenue to climb 35.5% to reach $16.57 billion. Investors should note that Alibaba reports its metrics in Chinese RMB and then offers a comparable U.S. dollar equivalent for the “convenience of the reader.” With that said, the company’s revenue jumped 51% in Q4 fiscal 2019.

Overall, Alibaba’s top-line expansion looks poised to slow going forward. The company’s full-year fiscal 2020 revenue is projected to climb 34% from roughly $56 billion to $74.57 billion. Peeking further ahead, the company’s 2021 sales are expected to climb 29.5% above our current-year estimate to reach $96.62 billion. For reference, BABA’s revenue jumped 51% during its fiscal 2019 and 58% in 2018.

At the bottom end of the income statement, Alibaba’s quarterly earnings are projected to jump 22.9% to reach $1.50 a share. The firm’s full-year fiscal 2020 EPS figure is then expected to pop 16%, with 2021 projected to come in 27% higher than our current-year estimate. It is also worth noting that Alibaba easily topped our earnings estimates in the trailing three periods, by an average of 19%.

Alibaba’s revenue growth clealry seems like it is set to slow down significantly, which is to be somewhat expected as its overall sales reach whopping totals. Going forward, BABA plans to focus on expanding its customer base in less-developed cities—so-called tier three and below—as the likes of Beijing and Shanghai become more saturated. The firm also hopes to extend its cloud computing reach, after it reportedly captured about 45% of China’s total cloud market last period.

Alibaba’s positive earnings estimate revision activity helps it earn a Zacks Rank #2 (Buy) at the moment. The company also sports a “B” grade for Growth in our Style Scores system. But the company’s estimates could change as we get closer to the release of its Q1 2020 earnings results that are due out Thursday, August 15.

Lyft Wows Investors Now The Pressure is On For Uber