The contract was awarded by the Supervisor of Shipbuilding, Conversion and Repair, Groton, CT. Work related to the deal will be carried out in Groton, CT, and is scheduled to be over by December 2019.

A Brief Note on USS Washington

Being one of the only two contractors in the world equipped to build nuclear-powered submarines, General Dynamics enjoys a dominant position as a Navy contractor.

In December 2016, the Navy announced its force-level goal of achieving and maintaining a 355-ship fleet including 66 SSNs. This clearly reflects the U.S. Navy’s optimism surrounding this class of nuclear submarines.

In fact, in the light of rising terrorist acts over the last couple of years, the U.S. Navy is currently building an advanced model of Virginia-class submarines named the Virginia Payload Module (VPM). This will come with an additional, 84-foot-long, mid-body section equipped with four large-diameter, vertical launch tubes for storing and launching additional Tomahawk missiles or other payloads. In this regard, it is imperative to mention that the U.S. Navy’s fiscal 2020 budget shows that Virginia-class boats with and without the VPM have estimated recurring unit procurement costs of roughly $3.2 billion and $2.8 billion, respectively.

Since General Dynamics remains one of the prime submarine contractors in the nation, such aforementioned developments along with the latest contract win should bode well for this stock.

Shares of General Dynamics's have rallied about 9.6% in the past three months, outperforming the industry's 7.8% growth. 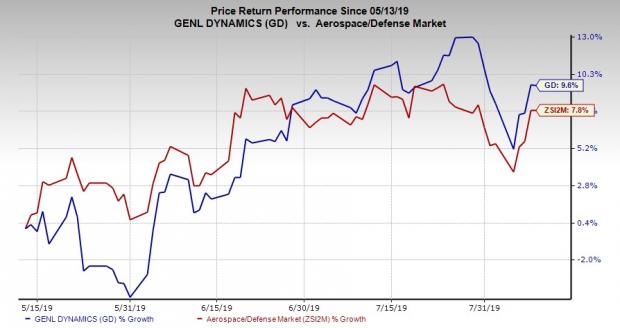 Lockheed Martin delivered average positive earnings surprise of 16.03% in the last four quarters. The Zacks Consensus Estimate for 2019 earnings has moved 3.8% up to $21.04 over the past 90 days.

Northrop delivered average positive earnings surprise of 20.11% in the trailing four quarters. The Zacks Consensus Estimate for 2019 earnings has climbed 1.6% to $19.59 over the past 90 days.

Wesco Aircraft’s long-term growth estimate currently stands at 12%. The Zacks Consensus Estimate for fiscal 2019 earnings has moved 1.2% north to 85 cents over the past 90 days.

Innospec's (IOSP) Earnings In Line, Revenues Up Y/Y in Q2