Copart, Inc. (CPRT - Free Report) announced that it is making an expansion of 40 acres in its Atlanta East location. The expansion will aid the online vehicle auction company to meet the increasing requirements of customers.

Based in Dallas, TX, Copart provides online auction and a wide range of remarketing services to process and sell salvage and clean title vehicles. The latest expansion is in sync with the company’s capacity growth initiative.

Notably, Atlanta East in one of the nine locations of Copart in Georgia. The company utilizes its resources to offer the best experience to those who buy vehicles from this location.

Copart is focusing on expanding its storage capacity throughout the United States and overseas to meet growing customer demand. Stronger network aids it to add more cars in inventories and sell those at auctions, thus driving revenues.

Over the past year, shares of Copart have outperformed the industry it belongs to. During that period, shares of the company have gained 22.5% compared with the industry’s growth of 16.6%. 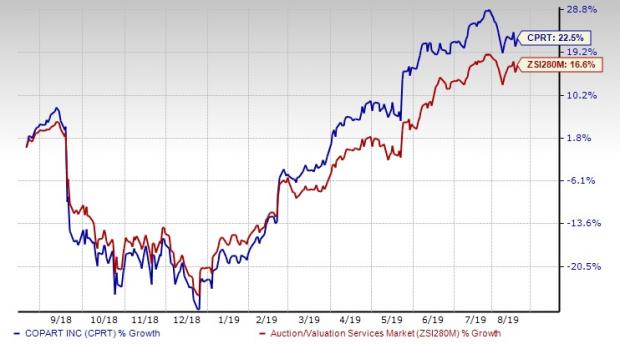 Fox Factory has an expected long-term growth rate of 16.7%. In the past six months, shares of the company have rallied 20.7%.

CarMax has an expected long-term growth rate of 12.6%. In the past six months, shares of the company have risen 36.3%.

Gentex has an expected long-term growth rate of 5%. In the past six months, shares of the company have returned 29.5%.