Why Are Norfolk Southern (NSC) Shares Up More Than 16% YTD?

Shares of Norfolk Southern Corporation (NSC - Free Report) have rallied 16.6% so far this year, primarily owing to the company’s consistent cost-containment measures. Additionally, its endeavors to reward shareholders through dividends and share buybacks are also encouraging. 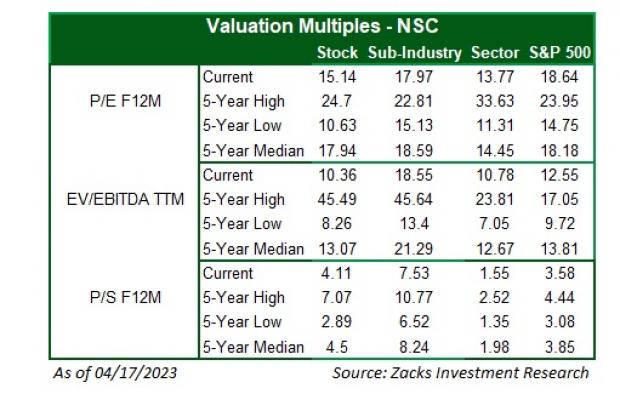 Let’s delve into the details.

Norfolk Southern is making constant efforts to streamline operations with an eye on increasing productivity. In line with its efforts to improve efficiencies, the company’s operating ratio (operating expenses as a percentage of revenues) improved to 64.8% in the first half of 2019 from 66.9% a year ago. Notably, lower the value of the metric, the better. This key metric is benefiting from the company’s low operating expenses, courtesy of modest fuel prices.

In a bid to improve efficiencies and customer service further, the company has implemented the precision scheduled railroading operating plan, TOP21. Gaining traction from this model, the company predicts its operating ratio (operating expenses as a percentage of revenues) to improve at least 100 basis points in 2019 compared with 65.4% achieved in 2018. Additionally, the company aims for a full-year operating ratio of 60% by 2021.

As far as the company’s measures to reward shareholders through dividends and share buybacks are concerned, it has returned $1.5 billion to its shareholders through dividend payouts ($458 million) and repurchases ($1,050 million) in the first half of 2019, reflecting a 36% year-over-year increase. Additionally, this July, the company’s board announced a dividend hike of 9% to 94 cents a share ($3.76 annually). The fact that the company has generated free cash flow of $973 million during the first half of 2019 hints at an uptick in such shareholder-friendly activities.

Further, increase in revenue per unit has aided the company’s top line in the first six months of 2019. While the top line rose 4.5% in the first quarter, it inched up 1% in the second. Higher revenues helped the company generate earnings growth of 30.1% and 8% in the first and second quarter of 2019, respectively.

Shares of Canadian Pacific, GATX and Delta have gained more than 35%, 6% and 16% so far this year, respectively.

Americans spend an estimated $150 billion in this industry every year… more than twice as much as they
spend on marijuana.

Now that 8 states have fully-legalized it (with several more states following close behind), Zacks has
identified 5 stocks that could soar in response to the powerful demand. One industry insider described
the future as “mind-blowing” – and early investors can still get in ahead of the surge.