Wall Street is suffering from severe volatility throughout August. Worsening trade conflict between the United States and China, fear of an impending recession in the United States owing to frequent inversion of sovereign yield curve and global economic slowdown especially in China and Germany, significantly dented investors’ confidence in equities. Market is likely to remain unstable in the near term due to the above-mentioned factors.

U.S. stocks are facing regular fluctuations in August after a rally in the previous two months. So far in August, the three major stock indexes -- the Dow, the S&P 500 and the Nasdaq Composite -- have lost 3.5%, 3.4% and 3.9%, respectively. All four indexes registered weekly loss in the previous four consecutive weeks.

Moreover, in August, the Dow posted five daily declines of 1% or more, the S&P 500 witnessed four daily losses of more than 1% and the Nasdaq Composite has fallen at least 1% six times.

Meanwhile, the bond market is giving strong signal of an impending U.S. recession since the mid of this month. Yields on 2-year and 10-year U.S. Treasury Notes inverted on Aug 14, for the first time since December 2005. Thereafter, this 2-10 year yield inversion took place at least five times this month, though for a brief period of time.

On Aug 22, the IHS Markit reported that the U.S. manufacturing index for the month of August plunged to its 10 year-old low level at 49.9 from 50.4 in July. Notably, a reading below 50 means U.S. manufacturing contracted in August. Likewise, the services sector index plummeted to 50.9 in August from 53.0 in July, marking a 3-month low.

On Aug 26, the Department of Commerce reported that U.S. durable goods orders for the month of July increased by a healthy 2.1%. However, the core durable goods orders (excluding defense products and aircraft) ---- a major proxy for business investment plan ---- grew a mere 0.4%, indicating slowing capex trend.

Germany, the fourth-largest economy in the world, witnessed a 0.1% contraction in its second-quarter 2019 GDP, the first time since the third quarter of 2018. Industrial output in July also declined 5% year over year. The German Ifo Institute reported that business sentiment in July came in at a reading of 94.3, the lowest level since November 2012.

In China, industrial output grew 4.8% in July, marking its lowest growth in more than 17 years. Retail sales in China were up 7.6% in July, reflecting the second-lowest rate of growth since 2003.

Rate Cuts and Injection of Stimulus

Several major central banks have adopted interest rate cut and injection of stimulus within the economy to cope with an impending global economic slowdown.

Moreover, the European Central Bank and Bank of Japan are looking for options for a further rate cut despite the fact that both Eurozone and Japan are currently having negative interest rate. On Jun 4, the Reserve Bank of Australia cut benchmark interest rate by 25 basis points to a historic low of 1.25%.

In the United States, the Federal Reserve reduced the benchmark lending rate by 25 basis points to the range of 2-2.25%, for the first time since December 2008. The Fed Chair recently reiterated that the central bank will do in the future whatever is needed to maintain U.S. economic expansion, which is currently at the historically longest 11th year.

At this juncture, stocks with high-dividend yield and strong growth potential will be attractive. Regular dividend will ensure a steady income stream. We have narrowed down our search to five such stocks each carries a Zacks Rank #1 (Strong Buy). You can see the complete list of today’s Zacks #1 Rank stocks here.

Moreover, all five stocks are currently priced below $15, making them affordable to general investors. 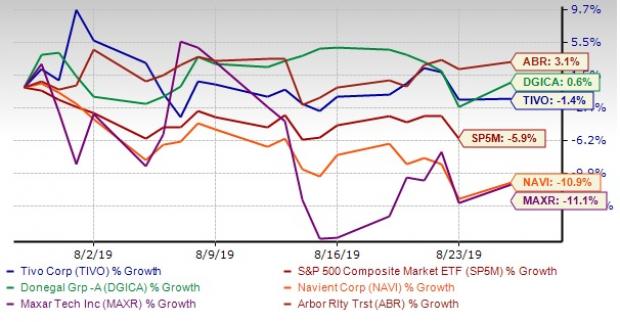 Donegal Group Inc. DGICA is an insurance holding company, which provides personal and commercial lines of property and casualty insurance to businesses and individuals in the Mid-Atlantic, Midwestern, New England and southern states.