Notably, the Zacks Consensus Estimate for the current-year earnings has been revised marginally upward to $4.31, in the past 30 days. Currently, the stock carries a Zacks Rank #3 (Hold).

Also, shares of U.S. Bancorp have gained 2% over the past three months as against the 3.1% fall recorded by the industry. 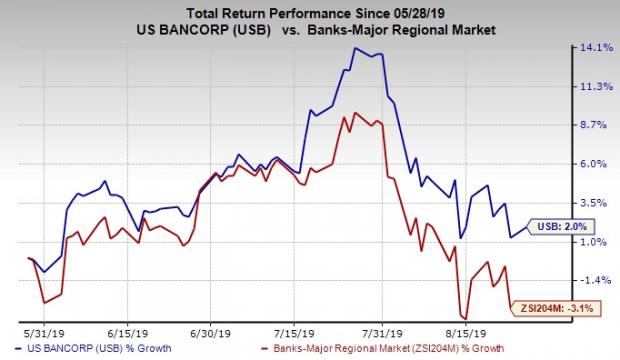 The company’s top-line growth is supported by relatively higher rates and loan growth. Additionally, U.S. Bancorp’s inorganic growth strategy helped fortified its market share in new and existing regions. Thus, such a trend is likely to boost the company’s revenues in the upcoming period.

With gradual change in the rate environment, the company reported a rise in net interest margin (NIM) over the past couple of years. Despite the recent rate cut by the Fed, amid the central bank’s accommodative monetary-policy stance, improvement in economy and decent loan growth might support the company’s margin.

Remarkably, U.S. Bancorp’s dividend and share-repurchase plan is in place, backed by a solid capital position. Notably, the company returned 79% of its earnings to shareholders during the June-end quarter, meeting the target payout ratio.

However, elevated costs remain on the downside. Though expenses declined in 2018, the company’s non-interest expenses witnessed a CAGR of 5.9%, over the last five years (2013-2017), with the trend continuing in the first half of 2019 as well.  Therefore, high investments in technology will likely continue to put pressure on its expense base.

Although U.S. Bancorp’s financials are backed by strong growth in average loans, there is a lack of diversification, as nearly 50% of its loans are commercial, as of Jun 30, 2019.

Customers Bancorp, Inc.’s (CUBI - Free Report) estimates remained unchanged over the past 30 days. Further, the company’s shares have gained 2.4%, year to date. At present, it sports a Zacks Rank of #1.

HomeStreet, Inc. HMST estimates remained unchanged over the past 30 days. Additionally, the stock has jumped around 25.4% year to date. It currently flaunts a Zacks Rank #1.