The global economic outlook remains lackluster, dragged down by a string of economic and political huddles. While most of the economic woes are tied to the ongoing U.S.-China trade war, political issues in many countries stem out of their respective government policies. Dampening growth in emerging economies also pose a threat. In such a scenario, one could focus on the U.S. economy and domestic companies, which have been shielded so far to a large extent.

Emerging economies that are taking a toll on global markets are China and India. China is a crucial market for companies worldwide. The trade conflict that started between the United States and China last year in July doesn’t seem to have a definitive end.

Although latest reports state that the two countries plan to go back to the negotiating table, China’s economy has already been hurt by the incumbent tariffs. This slowdown in China’s economy is affecting the purchasing power of its people, which in turn is resulting in lower demand.

Also, India is facing a rather sharp and persisting economic slowdown for the last 18 months. The reasons are decline in business confidence and consumption demand, record-high unemployment, and introduction of the new goods and services tax that had compelled foreign institutional investors to pull money out from the Indian equity market and park them in safe havens like government bonds.

Growth in Eurozone is Stalled

Germany’s economy is nearing an imminent recession, with business confidence in the country falling to its lowest level since November 2012. The economy contracted by 0.1% in Q2, and is expected to slow further in Q3. A major reason for this slowdown is the U.S.-China trade war.

Secondly, the uncertainty hovering over Britain’s policies ahead is already pulling down investment and GDP growth. The British economy sank 0.2% in Q2, dipping for the first time in seven years. If the United Kingdom parts with the European Union without a deal, the effect on UK’s and the global economy would be vast.

In addition, an increasing number of countries have already stepped into recession or are at the brink of it. Prominent among these are Iran, Venezuela, Argentina, Turkey and South Africa. Growing unrest on the political front, increasing debt and economic uncertainties are a few reasons for the crisis faced by these countries.

No matter how much worrying the international economic and political scenario might be, the U.S. economy appears as though it still has room to run.

Firstly, the U.S. economy added as many as 164,000 new jobs in July, per the Labor department. Job growth across sectors was broad-based, with professional and technical services, healthcare, social assistance and financial activities adding a decent numbers of new positions. July marked a record-high total labor force of 163.4 million.

Lastly, consumer confidence also rebounded in July after sliding in June. The consumer confidence index rose to 135.7 last month, which is the highest level since November. It is notable that a glum global economic outlook and trade worries haven’t affected consumer spending, which accounts for more than 70% of economic activity in the United States.

We have, therefore, chosen four domestic stocks that may be less affected by the economic and political crisis worldwide. You may consider adding these to your portfolio. All of these stocks carry a Zacks Rank #1 (Strong Buy) or #2 (Buy).

Casey's General Storescarries a Zacks Rank #1. In fact, the company’s stock price has already outperformed the Zacks Retail – Convenience Stores Market on a year-to-date basis (+32.6% vs +29.9%). The Zacks Consensus Estimate for its current-year earnings has risen 1.2% over the past 60 days. You can see the complete list of today’s Zacks #1 Rank stocks here.

J & J Snack Foods carries a Zacks Rank #2. In fact, the company’s stock price has already outperformed the Zacks Food – Miscellaneous Market on a year-to-date basis (+32.2% vs +11.2%). The Zacks Consensus Estimate for its current-year earnings has risen 1% over the past 60 days.

American States Water carries a Zacks Rank #2. In fact, the company’s stock price has already outperformed the Zacks Utility– Water Supply Market on a year-to-date basis (+33.1% vs +32.4%). The Zacks Consensus Estimate for its current-year earnings has risen 2.5% over the past 60 days. 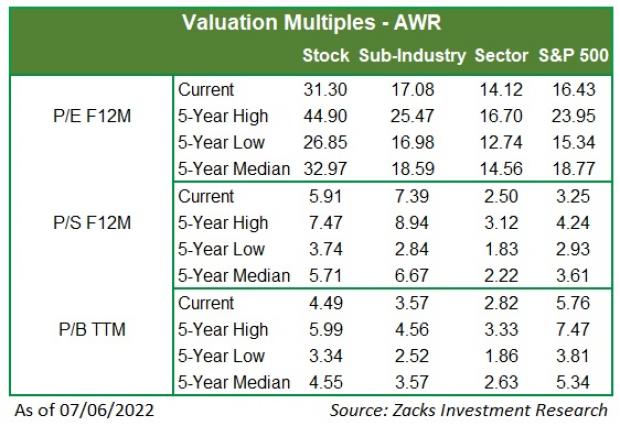 Cesca Therapeutics Inc. is a developer and marketer of integrated cellular therapies and delivery systems that boost the efficiency and safety of Regenerative Medicine.

Cesca Therapeutics carries a Zacks Rank #2. In fact, the company’s stock price has already outperformed the Zacks Medical – Instruments Market on a year-to-date basis (+14.3% vs +9.0%). The Zacks Consensus Estimate for its current-year earnings has risen 77.5% over the past 60 days.