Read MoreHide Full Article
Varian Medical Systems, Inc. (VAR - Free Report) recently completed the installation of cyclotron in its flagship ProBeam Compact single-room proton therapy system at the Sylvester Comprehensive Cancer Center in the University of Miami. This will boost Varian’s popular Proton Therapy platform.
Following the release, shares of the Zacks Rank #3 (Hold) company climbed 1% to $106.07 at close on Aug 28.
It is encouraging to note that Varian is currently strong on a series of positive developments.
More Developments in Proton Therapy
Varian's ProBeam is the world's first commercially available pencil beam scanning system, which is the most precise form of proton therapy available. Notably, the ProBeam Compact system is a single-room system equipped with a 360-degree gantry for intensity modulated proton therapy. Proton therapy is an advanced form of cancer care which uses protons to destroy cancer cells.
It is encouraging to note that last month the company installed the cyclotron for its flagship ProBeam Compact single-room proton therapy system at the King Chulalongkorn Memorial Hospital in Bangkok, Thailand. (Read More: Varian Installs ProBeam Compact in Thailand's Hospital)
In June, Varian exhibited its new ProBeam 360° proton therapy system. This is considered a major stride by the company to expand its reach within the cancer care market. Notably, the company’s Proton Solutions suite includes the Eclipse PT Treatment Planning, RapidPlan PT Knowledge-based Planning, Velocity, 360 Oncology Care Management and Noona.
Earlier, Varian completed the cyclotron installation for the ProBeam Compact single-room proton therapy system at Biopolis, an international biomedical research hub in Singapore.
Market Prospects
Technavio analysts expect the global proton therapy market to see a CAGR of more than 9% between 2018 and 2022. Advantages of proton therapy over standard radiation therapies currently fuel demand for proton therapy around the world.
Hence, the developments have been well-timed for Varian. 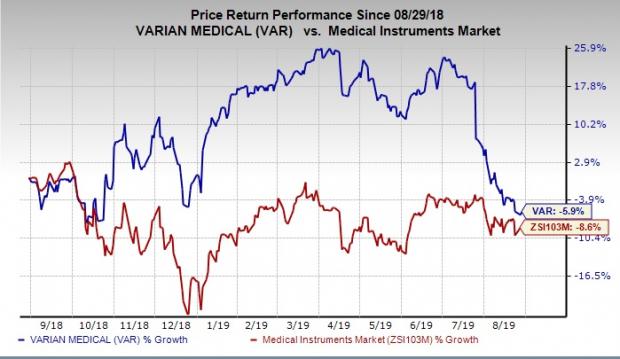 Price Performance
We believe positive developments such as these would boost the stock which has slipped 5.9% compared with the industry’s 8.6% decline in a year’s time. The current level is also lower than the S&P 500 index’s 2.9% decline.
Key Picks
A few better-ranked stocks in the broader medical sector are Baxter International BAX, Masimo Corporation MASI and Intuitive Surgical ISRG, each carrying a Zacks Rank #2 (Buy). You can see the complete list of today’s Zacks #1 Rank (Strong Buy) stocks here.
Baxter’s long-term earnings growth rate is expected to be 12.8%.
Masimo’s long-term earnings growth rate is projected at 20.5%.
Intuitive Surgical’s long-term earnings growth rate is expected to be 13.3%.
Breakout Biotech Stocks with Triple-Digit Profit Potential
The biotech sector is projected to surge beyond $775 billion by 2024 as scientists develop treatments for thousands of diseases. They’re also finding ways to edit the human genome to literally erase our vulnerability to these diseases.
Zacks has just released Century of Biology: 7 Biotech Stocks to Buy Right Now to help investors profit from 7 stocks poised for outperformance. Our recent biotech recommendations have produced gains of +98%, +119% and +164% in as little as 1 month. The stocks in this report could perform even better.