Dow Inc. DOW announced an agreement with Weert, the Netherlands-based Fuenix Ecogy Group for supply of pyrolysis oil feedstock. The feedstock is made from recycled plastic waste and will be used for producing new polymers at Dow’s production units at Terneuzen.

The agreement is a major step to increase feedstock recycling, which breaks down mixed waste plastics into their original form to produce new virgin polymers. The polymers manufactured from the pyrolysis oil are identical to products made from conventional feedstocks. As such, these can be used in similar applications that include food packaging.

Moreover, the deal highlights Dow’s strategy to shift toward a circular economy for plastics. The company is focusing on resource efficiency, renewable feedstocks and integrating recycled content into its production processes. Through this move, post-consumer plastics will continue to carry value through an extended lifespan.

The agreement also contributes to Dow’s commitment to include a minimum of 100,000 tons of recycled plastics sold in the European Union by 2025.

Notably, Dow is slated to showcase its recycling portfolio at the world’s largest plastics and rubber trade fair, K 2019, from Oct 16-23 in Dusseldorf, Germany.

Dow’s shares have lost 9.3% in the past three months, which is in line with its industry’s decline. 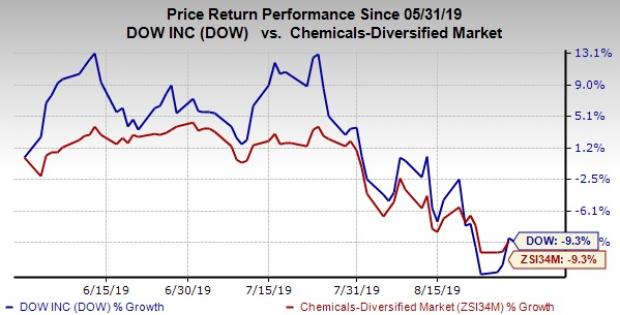 In second-quarter 2019 earnings call, the company stated that the pace of global economic growth has slowed as buying patterns remain cautious amid trade and geopolitical uncertainties.

Against the backdrop, the company focuses on maintaining cost and operational discipline through cost synergy as well as stranded cost-removal initiatives. It lowered planned capital spending for 2019 to $2 billion from $2.5 billion in response to the current market environment.

Alamos Gold has projected earnings growth rate of 320% for the current year. The company’s shares have rallied 68.6% in a year’s time.

Arconic has an estimated earnings growth rate of 50% for the current year. Its shares have moved up 15.2% in the past year.