Notably, this is part of NASA’s $159 million contract for procuring multiple technology innovations, which Leidos Holdings recently won. As part of this agreement, Leidos Holdings will utilize KULR Technology’s cost-effective TRS solution to improve cargo planning, processes and packing capabilities for the ISS.

Over heated, over charged or damaged lithium ion batteries can transit into a thermal runaway reaction with further heat and gas release. In certain cases when one lithium-ion cell in a pack catches on fire and it spreads through the entire pack, which is when a thermal runaway propagation occurs. Lithium ion batteries are widely used by NASA in varied items ranging from space suit to space vehicles. In fact, NASA was one of the earliest proponents of such battery use in space, due to smaller batteries and long-life expectancy. Moreover, these batteries have better energy density, often more than two times greater than other battery chemistries.

However, at high temperatures the cells of these batteries become thermally unstable leading to events like thermal runaway. Sadly, even the possibility of a single-cell thermal runaway is a matter of concern, since if it occurs all batteries in package will be destroyed owing to domino effect, causing thermal runaway propagation. Consequently, NASA aspires to prevent any event of thermal runaway, which can be catastrophic for space vehicles.

Benefits of the Collaboration

KULR Technology's patented TRS is well known for its capabilities to prevent thermal runaway propagation, which has been a serious concern for aerospace and defense customers, and electric vehicle manufacturers. Its unique combination and configuration of the shield passively draws intense heat of cell failures away from nearby cell, which helps to keep lithium ion batteries cooler and safer.

With increased use of lithium ion batteries by NASA over time, the demand for TRS will also rise. As the U.S. administration strongly focuses on strengthening the nation’s space research and development, Leidos Holdings’ latest partnership with KULR Technology paves the way for improving the efficiency of thermal management solutions. This in turn will allow the company to acquire more contracts from NASA, which has been allotted a spending provision of $21 billion for fiscal 2020, by the U.S. government — strongest on record budget for the agency.

Leidos Holdings’ stock has improved 26.3% in the last one year, compared with the industry’s growth of 10.9%. 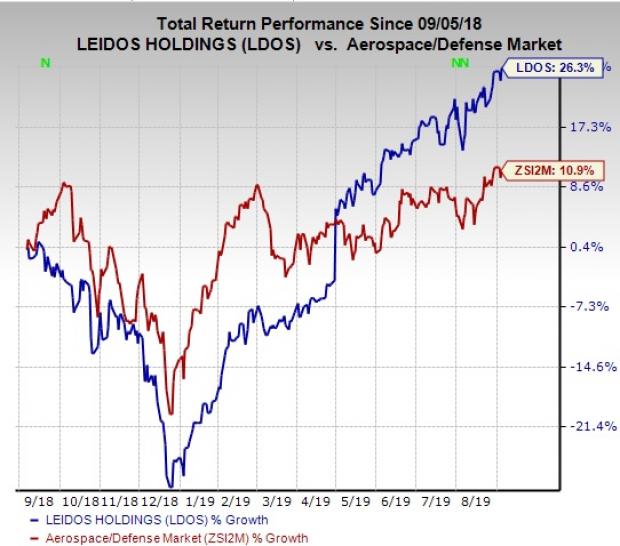 Wesco Aircraft’s long-term growth estimates currently stand at 12%. The Zacks Consensus Estimate for 2019 earnings has increased 1.2% to 85 cents in the past 60 days.