This contract will cover the AWS ship integration and test efforts for nine new construction DDG 51 class ships as well as the major modernization of seven DDG 51 class ships. It will additionally cover the integrated combat system modifications and upgrades for all current ships..

Majority of the work will be executed in Moorestown, NJ.

Lockheed Martin’s AWS is the world’s premier naval air defense system and the sea-based element of the United States’ Ballistic Missile Defense System. It is a seamlessly integrated radar and missile system that can simultaneously attack land targets, submarines, and surface ships while automatically protecting the fleet against aircraft, cruise missiles and ballistic missiles.

A key component of the AWS is the SPY-1 multi-function phased array radar — the world’s most advanced and versatile maritime radar.

With the current U.S. administration bolstering its naval defense significantly over the past couple of years, demand for combat-proven military ships like DDG 51 is witnessing an upsurge. The DDG 51 Arleigh Burke Class guided-missile destroyer combat system is centered on Lockheed Martin’s AEGIS Weapon System and an upgraded SPY-1 multi-function, phased-array radar.

In addition to its solid demand in the domestic front, the Aegis Ballistic Missile Defense System has been driving interest internationally. Lockheed Martin supports the development, production, modernization, ship integration, test and lifetime support for ships of international customers such as Japan, Spain, Republic of Korea and Australia. Moreover, it has ongoing programs in Canada and Chile for combat systems equipment upgrades on Halifax-class and Type 23 frigates. This reflects the solid global demand for Aegis Weapon System, offering ample growth opportunities for its developer – Lockheed Martin.

The aforementioned developments should benefit Lockheed Martin's RMS unit, which includes the Aegis Combat System program. Notably, this segment witnessed a year-over-year revenue improvement of 6% in the second quarter of 2019, with AWS being one of the primary growth contributors.

Considering the latest contract and the prospects of winning more such deals in coming days, we may expect the RMS unit to reflect similar top-line results.

Impressively, with the global Missiles and Missile Defense Systems (MMDS) market value projected to see a CAGR of 6% to $93 billion by 2027 from 2018 figure, growth prospects of Lockheed Martin’s AWS remain strong.

In a year’s time, shares of Lockheed Martin have rallied 17.2%, underperforming the industry’s 7.6% growth. 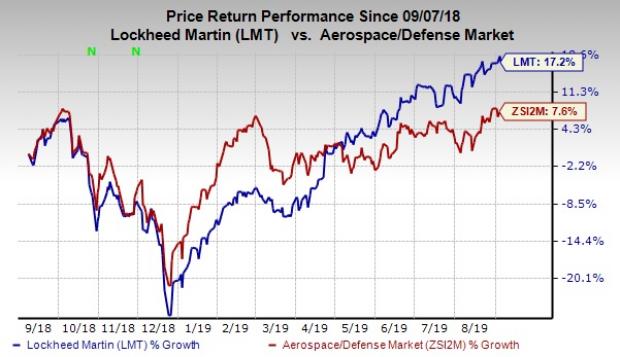 Wesco Aircraft’s long-term growth estimates are currently pegged at 12%. The Zacks Consensus Estimate for 2019 earnings has increased 1.2% to 85 cents over the past 60 days.

General Dynamics’ long-term growth estimates currently stand at 8.7%. The Zacks Consensus Estimate for 2019 earnings has risen 0.93% to $11.88 over the past 60 days