The Sherwin-Williams Company's SHW shares have gained around 24.9% over the past six months. The company has also outperformed its industry’s rise of roughly 23.8% to over the same time frame.

Sherwin-Williams, a Zacks Rank #3 (Hold) stock, has a market cap of roughly $48.6 billion and average volume of shares traded in the last three months is around 506.5K. The company has an expected long-term earnings per share growth of 12.1%. 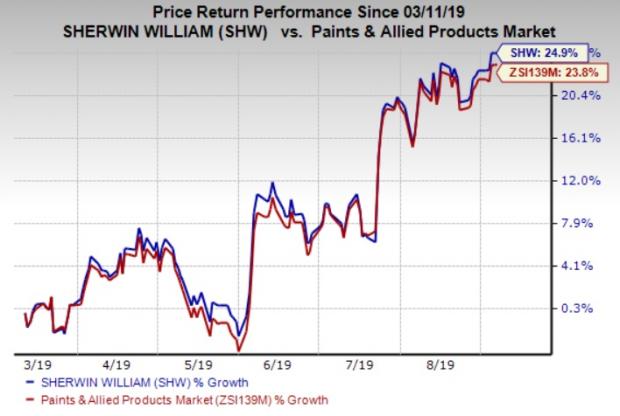 Forecast-topping earnings performance in the second quarter and upbeat prospects have contributed to the gain in Sherwin-Williams' shares.

Sherwin-Williams’ adjusted earnings of $6.57 per share for the second quarter topped the Zacks Consensus Estimate of $6.35. The company benefited from higher paint sales volume across all end markets in North American stores as well as higher selling prices.

The company backed adjusted earnings per share guidance in the range of $20.40-$21.40 for 2019. For the full-year, Sherwin-Williams expects 2-4% increase in net sales from 2018. It is optimistic about North American stores volumes in the second half of 2019.

Sherwin-Williams is gaining from its focus on growth through expansion of operations, its productivity improvement initiatives and synergies of the Valspar acquisition.

The company is witnessing favorable demand in its domestic end-use markets and remains committed to expand its retail operations. It is focused on capturing a larger share of its end-markets, as reflected by an increasing number of retail stores. Sherwin-Williams added 20 net new stores in the first six months of 2019. Plans are in place to add around 80-100 net new stores in North America by the end of 2019.

The company is also gaining from significant synergies of the Valspar acquisition. It expects incremental synergies of roughly $70-$80 million in 2019, with total annual run rate of around $415 million at the end of the year.

MasTec has an expected earnings growth rate of 32.4% for the current year and carries a Zacks Rank #1 (Strong Buy). The company’s shares have gained around 49% over the past year. You can see the complete list of today’s Zacks #1 Rank stocks here.

North American Construction has an expected earnings growth rate of 228.6% for the current year and carries a Zacks Rank #1. Its shares have rallied roughly 56% in the past year.

Great Lakes Dredge & Dock has an expected earnings growth rate of 335.3% for the current year and carries a Zacks Rank #2 (Buy). Its shares have surged around 68% in the past year.

Here's Why Moody's (MCO) is Worth Adding to Your Portfolio