In the past week, Spirit Airlines SAVE and JetBlue Airways Corporation JBLU trimmed unit revenue projections for third-quarter 2019. Sprit Airlines went a step further and predicted higher non-fuel unit costs for the September quarter mainly due to Hurricane Dorian.

Delta Air Lines DAL also featured in the headlines due to its encouraging traffic report for August, wherein load factor (percentage of seats filled by passengers) improved as traffic growth outpaced capacity expansion.  Additionally, at the Cowen and Company 12th Annual Global Transportation conference, the carrier reiterated its revenue and earnings guidance for the September quarter.

Meanwhile, United Airlines UAL tweaked its third-quarter projection on passenger unit revenues. The Chicago-based carrier expects sluggish demand in China, including Hong Kong, to hurt third-quarter 2019 revenues. Also, Alaska Air Group (ALK - Free Report) revised its guidance for third-quarter unit revenues. The carrier expects revenue per available seat mile (RASM) to improve in the 3-5% range year over year (the earlier guidance had projected an increase in the 2-5% range). Economic fuel cost is now projected to be $2.15 per gallon compared with the earlier projection of $2.21 per gallon.

1. Spirit Airlines, which cancelled 768 flights due to Hurricane Dorian, now anticipates total revenue per available seat mile (TRASM: a key measure of unit revenues) to decline 2.5-3.5% year over year in the September quarter. The low-cost carrier had previously anticipated TRASM to slide in the 1-2% range. Spirit expects an approximate $25-million revenue impact due to Hurricane Dorian. Adjusted non-fuel unit costs are expected to increase 9-10% year over year in the third quarter, reflecting a 200-basis points increase from the prior estimate. The adversity is due to reduced capacity and higher costs associated with Hurricane Dorian. (Read more: Spirit Affected by Hurricane Dorian Slashes Q3 TRASM View)

2. JetBlue now anticipates RASM to either increase to 2% or remain flat year over year in the September quarter. Previously, the metric was estimated to rise in the 0.5-3.5% range. This bleak third-quarter RASM view can be attributed to 1.25 points negativity from low bookings to Puerto Rico, 0.75 points adversity each from Hurricane Dorian and challenges in Punta Cana, and a 1-point headwind from lower-than-expected demand across its system. (Read more: JetBlue Shares Decline More Than 4% on Q3 RASM View Cut)

3. Backed by strong demand for its services and rising revenues, Delta is hopeful about achieving its third-quarter earnings and revenue targets. For the September quarter, earnings (excluding special items) are anticipated between $2.10 and $2.40 per share Meanwhile, total unit revenues, on an adjusted basis, are estimated to increase 1.5-3.5%. Additionally, the carrier is confident about registering 6-7% top-line growth and a 25% surge in earnings per share in 2019 besides generating solid margins. (Read more: Delta's August Traffic Data Solid on Strong Demand)

During the first eight months of 2019, the carrier registered a 100-basis point improvement in load factor to 86.8% as traffic growth (2.9%) outpaced capacity expansion (1.7%). However, passenger count slipped 1.4% during the same period. 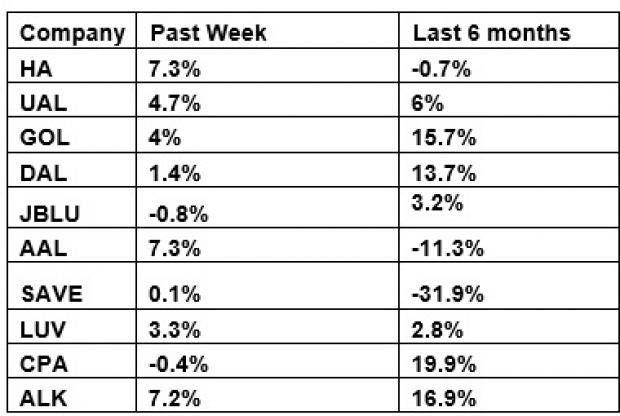 The table above shows that most airline stocks traded in the green over the past week, resulting in the NYSE ARCA Airline Index gaining 5.4% to $96.67. Over the course of six months, the same depreciated 1.7% due to double-digit losses at the likes of Spirit Airlines and American Airlines.

Investors will look forward to August traffic reports from the likes of JetBlue in the coming days.

Why Should You Hold Community Health in Your Portfolio?