Shares of Air Products and Chemicals, Inc. APD have rallied around 37.9% so far this year. The industrial gas giant has also outpaced its industry’s decline of roughly 21.1% over the same time frame. Moreover, it has outperformed the S&P 500’s gain of around 20% year to date.

Air Products, a Zacks Rank #3 (Hold) stock, has a market cap of roughly $49.2 billion and average volume of shares traded in the last three months was around 1,005.3K. The company has an expected long-term earnings per share growth rate of 12.1%, higher than the industry average of 9.8%. 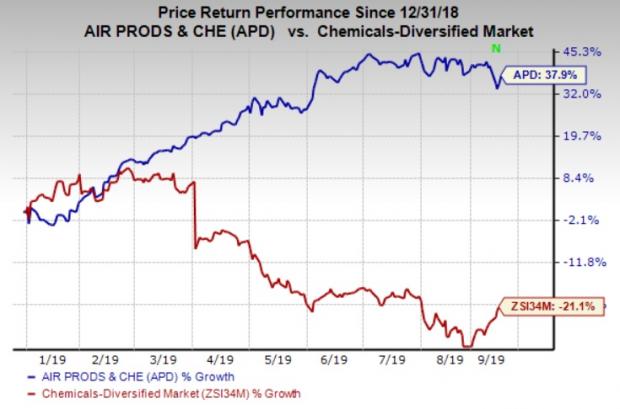 What's Behind the Rally?

Better-than-expected earnings performance in the last two quarters and upbeat growth prospects for fiscal 2019 have contributed to the gain in Air Products' shares. The company delivered positive earnings surprises of 2.1% and 1.4%, respectively, in the fiscal second and third quarters, respectively.

Air Products, in July, said that it now expects adjusted earnings for fiscal 2019 in the range of $8.20-$8.25 per share. This suggests more than 10% rise year over year at the midpoint. The company also expects adjusted earnings for fourth-quarter fiscal 2019 in the band of $2.26-$2.31 per share, which indicates 13-16% rise year over year.

The Zacks Consensus Estimate for earnings for fiscal 2019 of $8.24 reflects an expected year-over-year growth of 10.6%. Moreover, earnings are expected to register a 14.5% growth in the fiscal fourth quarter.

Air Products is poised for growth on the back of its project investments, new business deals and acquisitions. Its strategic investments in high-return projects, productivity actions and contributions of acquisitions should drive its fiscal 2019 results.

Moreover, new projects, especially the Lu'An syngas project in China, are contributing to volume growth in the company’s Industrial Gases – Asia segment. The company expects the Lu'An project to contribute more than 25 cents per share to its earnings in fiscal 2019. The company also expects to close the Jazan gasifier and power project in Saudi Arabia by the end of 2019. It is working on a number of gasification projects globally.

Air Products remains focused on deploying capital in high-return industrial gas projects. It has a total available capacity to deploy (over fiscal 2018-2022) nearly $17 billion in high-return investments, aimed at creating significant shareholder value. Air Products has already spent or committed more than half of this capacity.

Kinross has projected earnings growth rate of 160% for the current year. The company’s shares have surged around 64% in a year’s time.

NewMarket has an expected earnings growth rate of 16.2% for the current year. Its shares have gained around 15% in the past year.

Alamos Gold has estimated earnings growth rate of 320% for the current year. The company’s shares have rallied roughly 41% in a year’s time.