Why You Should Keep Albemarle (ALB) Stock in Your Portfolio

Albemarle Corporation ALB is well placed to leverage strong expected growth in the battery-grade lithium market. It should gain from rising demand for lithium-ion batteries that are used to power electric cars.

Shares of Albemarle are down 10.1% so far this year, compared with the 19.6% decline of its industry. 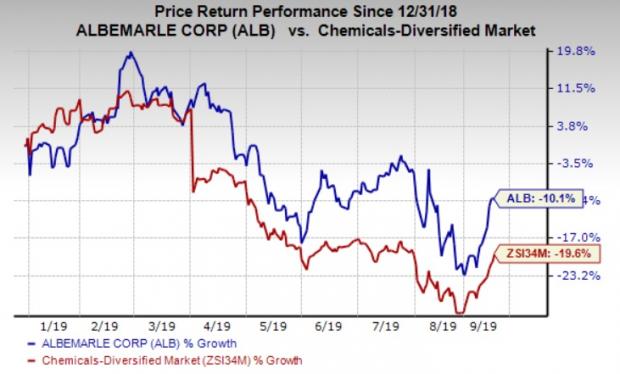 Albemarle is witnessing strong demand for lithium in battery-grade applications. It is executing a number of projects aimed at boosting its global lithium derivative capacity.

The market for lithium-ion batteries has a lot of untapped potential. Demand for these batteries are expected to go up with their increasing adoption in consumer electronic products as well as efforts to promote the use of electric cars by several governments to curb pollution. The company sees strong year-over-year growth in its Lithium unit for the balance of 2019.

The company is progressing with a 20,000-metric ton lithium hydroxide expansion in China at the Xinyu II facility. It also expects to produce around 40,000 metric tons of lithium carbonate from its two existing operating units in La Negra in Chile in 2019. The company has also commenced work at its lithium hydroxide conversion plant in Kemerton, Western Australia.

Albemarle is also gaining from continued strong demand for flame retardants, especially in electronics, which is supporting volume growth in its Bromine Specialties unit.

Albemarle also remains committed to deliver incremental returns to shareholders. The company, earlier this year, raised its quarterly dividend by 10% to 36.75 cents per share. The hike represents the 25th straight year of dividend increase by the company.

Albemarle is exposed to currency headwinds. Unfavorable currency swings, stemming from a stronger dollar against various currencies, impacted its sales by $16.2 million in the second quarter. Unfavorable impact on sales for the Lithium unit was $7.3 million in the quarter. Impact for Bromine and Catalysts units were $3.4 million and $5.4 million, respectively. Currency headwind will likely continue in the third quarter.

Moreover, the company’s Catalysts segment faces some challenges from an expected decline in Performance Catalyst Solutions (PCS) business in 2019 due to pricing pressures and the loss of a large customer contract. Albemarle sees PCS related headwinds of $11 million in 2019.

Kinross has projected earnings growth rate of 155.7% for the current year. The company’s shares have surged around 57% in a year’s time.

NewMarket has an expected earnings growth rate of 16.2% for the current year. Its shares have gained around 14% in the past year.