The Zacks Property and Casualty Insurance industry is currently undervalued compared with the Zacks S&P 500 composite as well as the Zacks Finance sector. The price-to-book (P/B) ratio, the best multiple for valuing insurers because of their unpredictable financial results, is 1.4, less than the Zacks S&P 500 composite’s P/B of 4.05 and the sector’s P/B of 2.69. Such below-market positioning hints at room for upside in the coming quarters.

Before their valuation increases, it is wise to add some undervalued stocks with growth potential to one’s portfolio.

Also, the hurricane season that typically starts in June and lasts through November during a year gathers strength in August and September. Colorado State University (CSU) estimates ‘near average Atlantic hurricane season in 2019’. There will be 14 named storms, including six hurricanes and two major hurricanes per CSU. In September, Hurricane Dorian made landfall, battering the Bahamas. Frequent occurrences of natural disasters should accelerate the policy renewal rate.

Per media reports, analysts at UBS Group AG estimate Hurricane Dorian to cause about $25 billion in losses in Bahamas. AccuWeather estimates the total damage and economic loss stemming from Hurricane Dorian to be in the range of $8-10 billion. Risk modeling and analytics firm RMS expects insured losses to range between $3.5 billion and $6.5 billion per a media release.

Though catastrophes are a concern for insurers, due to the high degree of losses incurred, they implement price hikes to ensure uninterrupted claims payment. After witnessing 19 back-to-back quarters of soft pricing market, insurers started increasing prices from the fourth quarter of 2018, which continued through the first half of 2019. Per Willis Towers Watson plc’s Commercial Lines Insurance Pricing Survey in 2019, most of the commercial insurance lines should witness rate increase.

Property and casualty insurers are also increasingly taking reinsurance covers to shield their profits. These have been inducing increase in reinsurance renewal rates. Per a report in Insurance Journal, S&P Global expects rates to rise about 5%, Moody’s 0-5% and Fitch 1%-2%. Per the report, “analysts at UBS estimated that the reinsurance industry is in an excess capital position of around $30 billion, but that an estimated $70 billion of natural catastrophe losses in 2019 could erode this excess capital.”

Though P&C insurers’ financials are less sensitive to interest rates than life insurers’, as the large financial portfolios managed by these carriers are designed to be fairly conservative, the improving interest rate environment will cushion investment income.  However, there remains a high chance of Fed cutting rates for the second time this year in its ongoing two-day FOMC meeting, given slowdown in growth, trade war with China and geopolitical tension like attacks on Saudi Arabia's oil facilities. The Fed had already made a 25 basis point rate cut in July.

The Zacks Industry Rank, which is basically the average of the Zacks Rank of all the member stocks, indicates solid prospects in the near term. The industry currently carries a Zacks Industry Rank #30, which places it in the top 12% of 255 Zacks industries.

Also, in a year’s time, the industry’s earnings estimate for the current year has gone up 3.9% while that for 2020 has increased 0.6%, rightly positioning it in the top 50% of the Zacks-ranked industries.

Nonetheless, strategic initiatives to build a competitive and diversified portfolio, and mergers and consolidation for ramping up growth and extending global presence position insurers well for a healthy performance ahead.

With the help of our Zacks Stock Screener, we have selected four P&C insurance stocks with an impressive Value Score of A or B and a Zacks Rank #2 (Buy). Back-tested results have shown that stocks with a favorable Value Score coupled with a solid Zacks Rank are the best investment options. You can see the complete list of today’s Zacks #1 Rank (Strong Buy) stocks here.

These stocks have also witnessed positive estimate revisions, reflecting analysts’ confidence in the companies’ operational efficiency. Shares of these companies have outperformed the industry as well as the broader market year to date

Allstate ALL provides property and casualty, and other insurance products in the United States and Canada. Shares have rallied 30.6% year to date. The stock currently has a P/B ratio of 1.58. The Zacks Consensus Estimate for current-year earnings has moved up 7.9% and while that for 2020 has moved north by 3% over the past 60 days.

RenaissanceRe Holdings RNR provides reinsurance and insurance products in the United States and internationally. Its shares have rallied 42.1% year to date. It currently has a P/B ratio of 1.59. The Zacks Consensus Estimate for current-year earnings has moved up 9.1% while that for 2020 has risen 7.3% over the past 60 days.

American Financial Group AFG provides property and casualty insurance products in the United States. Shares have risen 19.7% year to date. It currently has a P/B ratio of 1.6. The Zacks Consensus Estimate for current-year earnings has moved up by 0.6% while that for 2020 has increased 0.9% over the past 60 days. 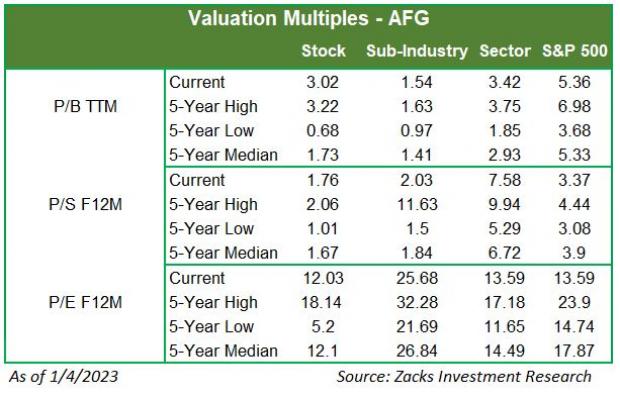 Selective Insurance Group (SIGI - Free Report) provides insurance products and services in the United States. Its shares have returned 24.4% year to date. It currently has a  P/B ratio of 2.18. The Zacks Consensus Estimate for current-year earnings has moved up 4.5% while that for 2020 is up 0.7% over the past 60 days. 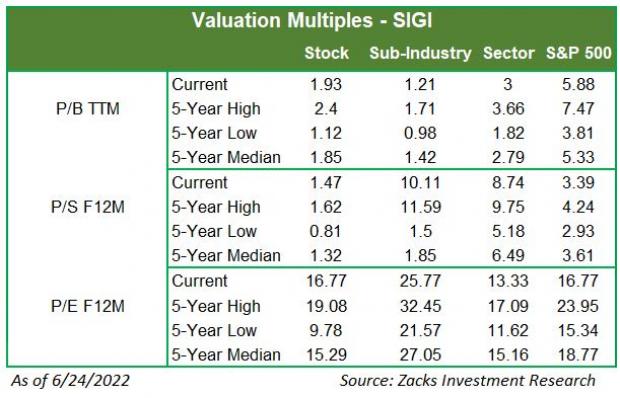