United States Steel Corporation (X - Free Report) has issued downbeat guidance for the third quarter of 2019. It expects to record adjusted loss per share of roughly 35 cents for the quarter.

The steel maker recorded adjusted earnings of 45 cents per share in the previous quarter and $1.79 per share a year ago.

The company’s projected loss for the quarter is also wider than expected. The Zacks Consensus Estimate for the third quarter is currently pegged at a loss of 12 cents per share.

U.S. Steel envisions adjusted EBITDA for the third quarter to be roughly $115 million. The projected figure excludes roughly $53 million of estimated impacts from the fire at the company’s Clairton coke making facility in December 2018.

The company expects its Flat-Rolled segment to be hurt, through the second half, by lower steel prices and higher-than-expected decline in scrap prices. It will continue to idle its two U.S. blast furnaces at least through the end of 2019.

The company also noted that market conditions have continued to weaken in Europe. Factoring in prevailing market conditions and sustained high level of steel imports into Europe, U.S. Steel does not expect to restart the currently idled blast furnace in 2019. The company has reaffirmed its shipment guidance of roughly 3.6 million tons for 2019.

Moreover, U.S. Steel expects its Tubular segment to remain under pressure through the balance of 2019 due to high import levels and unfavorable market conditions. The company also expects lower selling prices for seamless and welded pipe to hurt earnings of the division in the second half of the year.

Shares of U.S. Steel, which currently carries a Zacks Rank #3 (Hold), fell as much as 9% in after-hours trading yesterday. The stock has lost 31.7% year to date, underperforming the industry’s 6% decline. 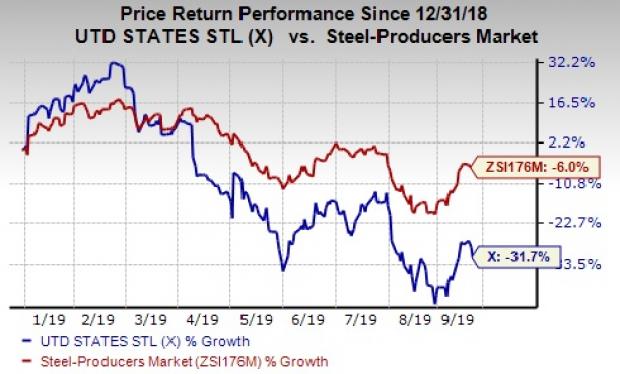 U.S. Steel, last month, noted that it completed several asset revitalization outages across the flat-rolled footprint on time and budget during the second quarter. These include upgrades to its Mon Valley steel shop.

The company expects these investments to boost its operating performance and reliability to offer low-cost, high-quality liquid steel for its future endless casting and rolling investment.

Kinross has projected earnings growth rate of 155.7% for the current year. The company’s shares have surged around 67% in a year’s time.

NewMarket has an expected earnings growth rate of 16.2% for the current year. Its shares have gained around 13% in the past year.

Alamos Gold has estimated earnings growth rate of 320% for the current year. The company’s shares have rallied roughly 34% in a year’s time.