Microsoft MSFT shares have easily outpaced over the last 12 months the group of five fellow tech giants that Wall Street lovingly named FAANG. Microsoft wasn’t left out of this group maliciously, many likely just assumed that its days of outsized growth were behind the firm that was founded in the mid-1970s.

This, however, is hardly that case, and Microsoft stock appears to be one of safest mega-cap tech buys out there at the moment, even at its new all-time highs.

Microsoft announced late Wednesday that it raised its quarterly cash dividend and approved a new stock buyback program. The company lifted its dividend to $0.51 per share, which marked an 11% increase from its last quarterly payout of $0.46. This is nothing earth-shattering because Microsoft has raised its quarterly payout every year since it started paying a dividend back in 2004. But it does remind investors once again of the historic tech firm’s strength and stability.

The new payout, which will be payable on December 12 to shareholders of record on November 21, marks a slightly larger increase than last year’s 9.5% boost from $0.42 to $0.46. Meanwhile, MSFT’s board approved a new stock buyback program of up to $40 billion.

Investors should note that this is the third time it has approved a repurchase plan of this scope. Overall, the firm said it bought back approximately $35.7 billion worth of stock between fiscal 2017 and 2019. 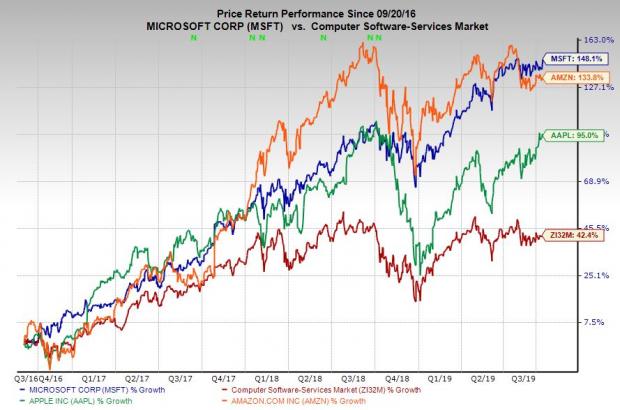 As we touched on at the top, shares of Microsoft have surpassed off al the so-called FAANG stocks over the last 12 months, which includes Facebook FB, Amazon AMZN, Apple AAPL, Netflix NFLX, and Google GOOGL. In fact, second-place FB stock is up just 14% compared to MSFT’s 24%. The company’s stock price has now even outpaced AMZN over the last three years and blows away Apple (chart above).

The Redmond, Washington-based firm has inspired investor confidence through buybacks and dividends, which it has been able to achieve through its growing cash position. The company closed Q4 fiscal 2019 (its most recent quarter) with over $52 billion in net cash from operations. Yet perhaps what has been even more attractive to Wall Street is MSFT’s expansion.

MSFT’s fourth quarter revenue popped 12%, with full-year sales up an impressive 14% for the second year in a row. More specifically, Intelligent Cloud sales jumped 21% in fiscal 2019 to account for 31% of total revenue. MSFT has seriously expanded its cloud computing business in recent years to cement itself as industry-leader Amazon’s biggest challenger.

The company has landed major clients such as Walmart (WMT - Free Report) . And it could attract more and more firms that have no intention of helping Jeff Bezos’ e-commerce giant that wants to further expand its reach in everything from pharmaceuticals to logistics.

Microsoft is also ready to jump into the nascent cloud gaming industry and the firm’s other businesses have performed well. MSFT’s Office and Windows units have evolved with the times and remain as important as ever. Meanwhile, some of its acquisitions, such as LinkedIn, have boosted the company. And 2018’s purchase of open-source software firm GitHub might prove to be another big winner.

Some might assume that the tech firm’s outsized climb over the last several years would push its valuation picture way out of whack. Yet, this doesn’t appear to be the case.

MSFT stock is trading at 25.6X forward 12-month Zacks earnings estimates, which is far above the S&P 500’s average. But that is not a good barometer. Microsoft stock is trading below its industry’s 27.9X average and its peer group, which includes Salesforce CRM, Oracle ORCL, and others, at 27.4X.

The chart below also shows that MSFT has consistently traded below its industry over the last three years. Plus, MSFT has traded as high as 29.9X during this stretch. Therefore, investors can say that the stock’s valuation is hardly that stretched at the moment, especially when we consider that Microsoft’s shares hit a brand new high of $142.37 per share Thursday.

Looking ahead, our current Zacks Consensus Estimates call for Microsoft's fiscal 2020 revenue to surge 11.1%, with 2021 projected to come in 10.5% higher than our current year estimate—which would mark four straight years of 11% or higher top-line expansion. At the bottom end of the income statement, MSFT’s earnings are projected to climb 10.1% and 12.8%, respectively, in the next two years.

The company’s new projected annualized dividend of $2.04 per share puts its current yield at roughly 1.44%—the 10-year U.S. Treasury note rests at 1.79%. Microsoft is also a Zacks Rank #3 (Hold) at the moment that boasts “A” grades for Growth and Momentum in our Style Scores system. In the end, MSFT stock looks like a stable tech buy at the moment.

Some might want to wait for a small pullback from its new highs. But Microsoft stock has charged full steam ahead for years and it doesn’t look ready to stop now.