The global economy is currently witnessing a slowdown owing to the lingering trade conflict between the United States and China which has resulted in a sharp decline in manufacturing activities and exports.

Although U.S. economic expansion is continuing for 11 years at a stretch, the pace of growth has declined. Several economists and financial researchers have expressed concerns regarding a global turnaround due to lack of any immediate growth catalyst.

Wall Street at a Crossroads

Overall, the first three quarters of 2019 are turning out to be highly fruitful for investors, marking a complete turnaround from a pathetic performance by Wall Street in the second half of 2018. However, this impressive performance does not guarantee continued success. Notably, Wall Street closed in the red for a week ended Sep 20, reversing its three straight weeks of a winning streak.

Fresh hopes of resumption of the negotiation process to reach to at least an interim deal between the United States and China had dented to some extent on Sep 20 as Chinese officials cut short their visit to the U.S. agricultural firms.

On Sep 19, Michael Pillsbury, a key White House adviser said the Trump administration is set to increase tariff pressure on China if a trade deal is not agreed upon soon as Washington has so far imposed only “low level tariffs” on China.

On Sep 23, the U.S. Department of Justice (DoJ) has warned domestic companies to be extremely careful about technology theft by China, echoing the most important concern of President Trump regarding trade with the Asian giant.

Per Adam Hickey, the U.S. Deputy Assistant Attorney General, China has been implicated for more than 80% of economic espionage cases since 2012 by the National Security Division of the DoJ. Clearly, the DoJ’s revelation will complicate the renegotiation process of a fresh trade deal between the two largest trading countries of the world, scheduled early next month.

On Sep 19, the Organization of Economic Co-Operation and Development (OECD), an intergovernmental economic group, projected that the world economy will grow just 2.9% in 2019, the lowest forecast since 2009. The OECD forecast 4% global growth in 2019 just 18 months ago.

The International Monetary Fund (IMF) reduced its growth forecasts for the global economy for 2019 and 2020. It predicts growth of 3.2% in 2019, down from its April forecast of 3.3%. The world economy is expected to witness growth of 3.5% in 2020, lower than its previous projection of 3.6%.Moreover, the World Bank also squeezed its global growth forecast for 2019 to 2.6% from the previously forecast 2.7% growth.

All three economic organizations have cited the tariff war between the United States and China as the primary reason for global slowdown given its adverse effect on exports and manufacturing. Additionally, geopolitical problems stemming from Brexit and Middle East have intensified fears of a global downturn.

The ongoing concerns about global economic slowdown and the recent inversion of government yield curve have not stalled the market’s growth. We have been able to narrow down our search on five stocks, which have moved higher in the past one month and still hold potential. All five stocks currently sport a Zacks Rank #1 (Strong Buy) and VGM Score of A. You can see the complete list of today’s Zacks #1 Rank stocks here.

Zumiez Inc. ZUMZ operates as a specialty retailer of apparel, footwear, accessories and hardgoods for young men and women. Its hardgoods include skateboards, snowboards, bindings, components, and other equipment. The company has an expected earnings growth rate of 20.7% for the current year. The Zacks Consensus Estimate for the current year has improved 14.3% over the last 30 days. The stock has jumped 24.4% in the past month.

Crocs Inc. (CROX - Free Report) designs, develops, manufactures, markets and distributes casual lifestyle footwear and accessories for men, women, and children worldwide. It offers various footwear products, including clogs, sandals, flips and slides, shoes and boots under the Crocs brand name. The company has an expected earnings growth rate of 65.1% for the current year. The Zacks Consensus Estimate for the current year has improved 1.4% over the last 30 days. The stock has climbed 15.7% in the past month. 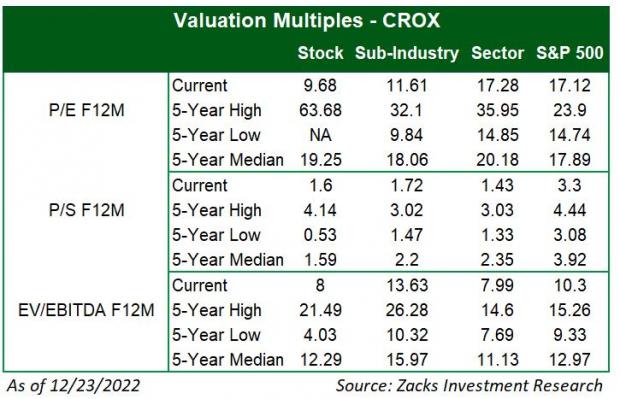 Genesco Inc. GCO is a specialty retailer, sells footwear, headwear and accessories in retail stores in the United States and Canada. It operates through four segments: Journeys Group, Schuh Group, Johnston & Murphy Group and Licensed Brands. The company has an expected earnings growth rate of 22.3% for the current year. The Zacks Consensus Estimate for the current year has improved 9.3% over the last 30 days. The stock has soared 18.7% in the past month.

GUESS? Inc. GES designs, markets, distributes and licenses lifestyle collections of apparel and accessories for men, women, and children. It operates through five segments: Americas Retail, Americas Wholesale, Europe, Asia, and Licensing. The company has an expected earnings growth rate of 37.8% for the current year. The Zacks Consensus Estimate for the current year has improved 3.8% over the last 30 days. The stock has jumped 21.4% in the past month.

Scholastic Corp. SCHL is the world's largest publisher and distributor of children's books and a leader in educational technology and children's media. It operates in three segments: Children's Book Publishing and Distribution, Education, and International. The company has an expected earnings growth rate of 19.4% for the current year. The Zacks Consensus Estimate for the current year has improved 0.8% over the last 30 days. The stock has surged 16.8% in the past month.