Unlike Eurozone, US Manufacturing Picks Up: 5 Picks

Manufacturing activity in the Eurozone came close to a halt amid trade issues and Brexit fears. But, the same bounced back in the United States despite odds, squashing doubts of a recession in manufacturing.

The upbeat manufacturing numbers show that top manufacturers are well poised to drive profits, which certainly calls for investing in them right now.

The ongoing U.S.-China trade tussle coupled with the threat of a no-deal Brexit triggered the worst decline in manufacturing output in almost seven years. The flash Eurozone manufacturing purchasing managers’ index dropped to an 83-month low of 45.6 in September from August’s reading of 47. Needless to say, any reading below the 50 mark is an indication that the economy is deteriorating.

Germany, which is the primary driver of manufacturing growth in the Eurozone, has suffered a year-long slowdown that has lately reversed. The German purchasing managers’ index came in at 41.4 in September, down from 43.5 in the previous month, and well below the 50 mark indicating contraction.

Thanks to increased tariffs on Chinese and U.S. imports, car manufacturers were affected the most. In fact, business optimism among executives is at record low levels as demand for goods and services continues to decline in the Eurozone economy. Chris Williamson,   Chief   Business Economist   at IHS Markit, summed up by saying that “the goods-producing  sector  is  going  from  bad  to worse,  suffering  its  steepest  downturn  since  2012.”

The escalated trade war may have dealt a big blow to the Eurozone manufacturing sector but U.S. factory activity showed enough resilience and staged a rebound. And it’s largely because of stronger new order growth, per Markit. The initial reading of the U.S. manufacturing purchasing managers’ index touched 51 in September, up from 50.3 in August and the highest since April.

And let’s admit that the Federal Reserve recently said that industrial production, a measure of factory, mining and utility output, increased at a seasonally adjusted rate of 0.6% in August compared to the prior month. The reading was well above analysts’ expectation of a 0.2% increase.

The Fed further added that output at U.S. factories increased an average 0.2% a month over the past four months after declining an average 0.5% a month during the first four months of the year. The mining index, which includes oil and natural gas extraction, also went up 1.4% in August after dropping 1.5% in July as Hurricane Barry affected oil rigs in the Gulf of Mexico. By the way, output in the volatile mining sector jumped 5.1% from a year ago.

Adding to the positives was an uptick in utility production. Capacity utilization increased to 77.9% in August, its highest level since March.

As key measures of U.S. factory output surpassed expectations, industrial stocks in particular are expected to gain. We have, thus, selected five such stocks that flaunt a Zacks Rank #1 (Strong Buy) or 2 (Buy).

Zebra Technologies Corporation (ZBRA - Free Report) designs, manufactures, and sells a range of automatic identification and data capture products. The company has a Zacks Rank #1. The Zacks Consensus Estimate for its current-year earnings has moved up 2.1% in the last 60 days. The company’s expected earnings growth rate for the current year is 16.7% compared with the Manufacturing - Thermal Products industry’s projected rally of 10.2%.

UFP Technologies, Inc. UFPT designs and converts foams, plastics, composites, and natural fiber materials for the medical, automotive, consumer, electronics, industrial, and aerospace and defense markets in the United States. The company has a Zacks Rank #2. The Zacks Consensus Estimate for its current-year earnings has climbed 2.3% in the last 60 days. The company’s expected earnings growth rate for the current year is 8.1% compared with the Containers - Paper and Packaging industry’s estimated rally of 4.1%.

AGCO Corporation AGCO manufactures and distributes agricultural equipment and related replacement parts. The company has a Zacks Rank #2. The Zacks Consensus Estimate for its current-year earnings has moved 3.3% north in the last 60 days. The company’s expected earnings growth rate for the current year is 30.6% against the Manufacturing - Farm Equipment industry’s projected decline of 4.6%. You can see the complete list of today’s Zacks #1 Rank stocks here.

Century Aluminum Company CENX produces standard-grade and value-added primary aluminum products in the United States. The company has a Zacks Rank #2. The Zacks Consensus Estimate for its current-year earnings has moved up more than 100% in the last 60 days. The company’s expected earnings growth rate for the current year is more than 100% against the Metal Products - Procurement and Fabrication industry’s estimated decline of 3.5%.

Lakeland Industries, Inc. LAKE manufactures and sells industrial protective clothing and accessories for the industrial and public protective clothing market. The company has a Zacks Rank #2. The Zacks Consensus Estimate for its current-year earnings has moved up more than 100% in the last 60 days. The company’s expected earnings growth rate for the current year is 9.8% against the Security and Safety Services industry’s estimated rally of 4.4%. 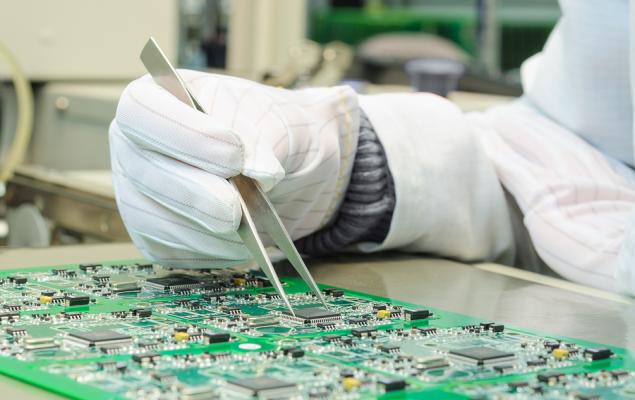