Netflix (NFLX - Free Report) shares are down 2% in 2019 and have fallen 30% over the last 12 months. The streaming TV firm’s fall can be blamed on its massive Q2 subscriber miss. This worried Wall Street and investors as NFLX prepares to face new competition from Disney (DIS - Free Report) and Apple (AAPL - Free Report) in November.

Last quarter, Netflix added only 2.7 million paid memberships, well under Wall Street projections and its own 5 million forecast. On top of that, the Los Gatos, California-based company posted its first quarter-to-quarter subscriber decline in the U.S. since 2011.

This is not the first time Netflix came up far short of its own estimates, but it did represent the largest miss over the last four years. Netflix executives blamed part of the subscriber miss on its new content schedule.

However, the company followed up its three previous subscriber shortfalls with massive, roughly one million membership beats the next quarter. For example, Netflix added 5.5 million subscribers in Q2 2018, when it projected 6.1. Then the firm added 6.1 million users in the third quarter of 2018 to blow away its 5.2 million forecast.

Looking ahead, Netflix expects to add 7 million paid users in the third quarter of 2019 to end the period with 158.6 million global subscribers. Company executives are confident that broader industry trends will work in their favor as more and more people cut the cord, especially internationally. 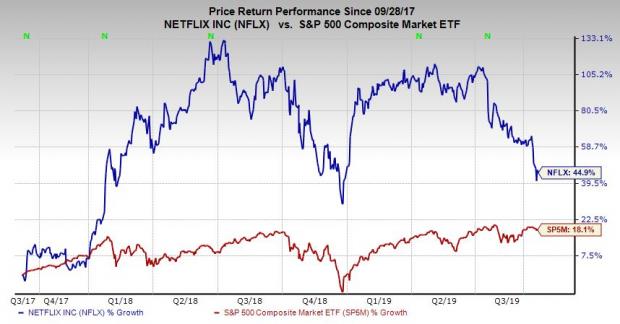 Netflix is currently the largest streaming platform in the world, with 60.1 million U.S. users and 91.5 million international subscribers. The company is larger than Amazon (AMZN - Free Report) Prime, which reportedly claims over 100 million users, while Hulu last reported 28 million users. But Apple TV+ will launch on November 1 for $4.99 per month.

Meanwhile, Disney+ is set to debut on November 12 at $6.99. As it stands, Netflix’s premium plan costs $15.99, while HBO Go runs (T - Free Report) $14.99 per month, and Amazon Prime costs $12.99—which comes with shopping and shipping perks. Netflix is likely pleased to see Apple and Disney’s price points because it might mean that users don’t have to pick sides. And even though Apple TV+ will feature A-list Hollywood stars both in front of and behind the camera, there isn’t much content yet.

Netflix will, of course, have to continue to roll out hit movies and shows in order to keep and gain users. And analysts are worried about the fact that the platform is about to lose three of its most-watched shows, The Office, Friends, and Parks and Recreation, over the next few years.

The Office is currently Netflix’s No. 1 show, according to Nielsen data. And library programming, which includes TV reruns licensed from other studios, accounted for 72% of total viewing minutes last year. This is why Netflix recently announced that it landed streaming rights for Seinfeld.

We can see in the chart above just how up and down NFLX stock has been over the last two years. Shares of Netflix over the last year have traded as high as $386.80 and as low as $231.23.

The stock currently hovers at around $261.78 per share, down approximately 32% from its 52-week highs. On the bright side, Netflix’s post-Q2 downturn could give the stock room to run heading into its Q3 earnings release.

Investors will also notice that the company’s forward price/sales ratio looks more appealing than it has for much of the past three years, trading at 4.9. Of course, some of this is based on its massive drop. Yet Wall Street isn’t focused on valuation too much at this point, which is good for NFLX because its forward earnings multiple remains sky-high.

What is likely more of a concern, is Netflix’s growing long-term debt load.  The firm had negative cash flow last quarter and projects it will be –$3.5 billion for fiscal 2019. The company has racked up more debt in order to fund content, which it does need in order to compete.

Netflix is a force within the larger streaming TV industry and it remains one of the only pure plays in this growing market, alongside Roku (ROKU - Free Report) —which tumbled recently. NFLX is currently a Zack Rank #3 (Hold) that has seen its Q3 earnings estimates climb.

Investors who can handle some risk might want to take a bite out of Netflix stock before it reports its Q3 results on Wednesday, October 16. With that said, the company’s near-term and longer-term future will almost certainly depend on its user growth figures. Therefore, a big subscriber beat could send its shares soaring, while a miss could spur a larger decline.