U.S. Silica Holdings, Inc. (SLCA - Free Report) recently announced that it has completed a voluntary loan repurchase offer for $10 million of principal of the term loan portion of its senior secured credit facility. The company used its surplus cash in hand to retire debt at a discount to par value.

The latest move to reduce debt reaffirms U.S. Silica’s commitment to lower leverage. The company believes that delevering is one of the most effective and prudent uses of its capital in the current environment.

Notably, the company had cash and cash equivalents of $189.4 million and long-term debt was nearly $1,229.8 million at the end of the second quarter.

Shares of U.S. Silica have plunged 56.4% in the past year compared with the industry’s 8.2% decline. 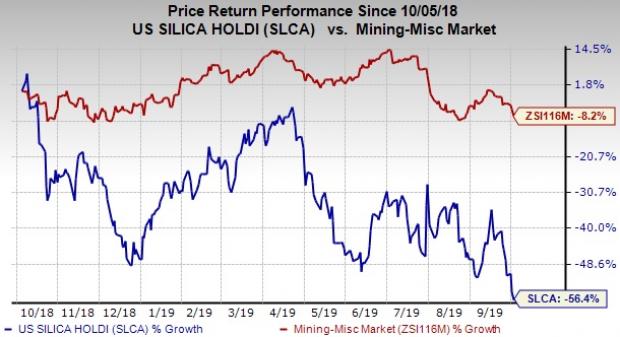 For Oil & Gas proppants, U.S. Silica expects volumes to increase roughly 10% sequentially in the third quarter. However, it expects softer volumes during the fourth quarter due to stretched production and exploration budgets as well as decline in activity levels.

Per the company, SandBox is making efficiency gains that are generating more savings with customers. It believes that this will offset margin pressure. Minimal non-productive time, bigger boxes and technological improvements are boosting operational efficiency as well as labor-cost effectiveness. The company is actively engaged in exploring new applications for the SandBox technology in other new oilfield segments and industries.

U.S. Silica is expected to gain from its expansion actions in the Permian Basin. The Sandbox and EP Minerals buyout are also expected to contribute to the company’s performance in 2019.

Agnico Eagle has a projected earnings growth rate of 158.6% for the current year. The company’s shares have rallied 52.6% in a year’s time.

Arconic has an estimated earnings growth rate of 50% for the current year. Its shares have moved up 9.2% in the past year.