Hamburg, Germany-based ROCCAT’s Kone Pure has become popular among many performance-focused gamers. The Kone Pure Ultra keeps the ergonomic shape of its predecessor, but is much lighter, weighing just 66 grams. This makes it one of the lightest PC gaming mice available in the market.

The product is also updated with the latest features, including ROCCAT’s Owl-Eye 16K sensor, 1,000hz polling rate, onboard memory for programmable Macros and profiles. It is currently available at participating retailers across Asia, the United Kingdom and Europe, and will be offered in the United States this winter for a list price of $69.99.

The audio technology company had completed the acquisition of ROCCAT at the end of May 2019. The strategic move marked the beginning of the next phase in Turtle Beach’s expansion into the $2.9 billion market for PC gaming headsets, mice and keyboards. This is considered to be a big leap in its goal of building $100 million PC gaming accessories business.

Turtle Beach remains confident that the expertise of its ROCCAT PC team and the combination of strong portfolio of PC gaming mice and keyboards with its own Atlas line of PC products well positions it for continued growth.

Turtle Beach topped earnings estimates in each of the trailing four quarters, the average positive surprise being 104.9%. The stock has returned 7% against the industry’s decline of 8% in the past three months. 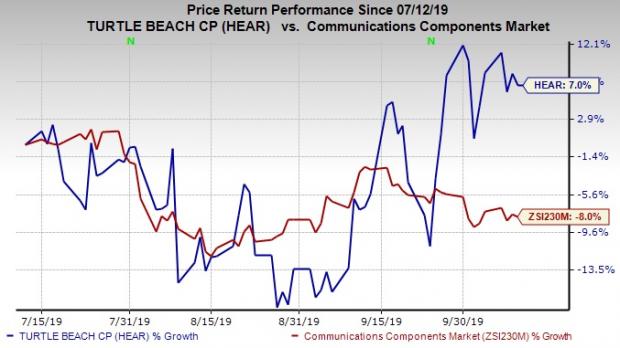 Arista surpassed earnings estimates in each of the trailing four quarters, the average surprise being 11.5%.

Harmonic surpassed earnings estimates in each of the trailing four quarters, the average surprise being 119.9%.