Facebook FB stock climbed over 2% Friday as all three major U.S. indexes jumped on the back of positive U.S.-China trade war sentiment. Nonetheless, the social media giant’s shares are down about 9% since it reported solid second quarter results in July.

Let’s take a look at what investors need to know about Facebook and some of its Q3 estimates to help us determine if FB stock might be worth buying at the moment.

Facebook holds a $525 billion market cap thanks to its ability to attract users across its array of platforms, which now includes its namesake social media platform, Instagram, WhatsApp, and Messenger. Mark Zuckerberg’s company remains invaluable to advertisers and marketers around the world as consumers become harder to reach in the Netflix (NFLX - Free Report) age.

Amid all the negative headlines and controversies, Facebook’s daily and monthly active user totals climbed 8% in the second quarter to match Q1’s expansion. Plus, its DAUs in the U.S. and Canada, which account for roughly 50% of revenue, showed signs of strength. Executives now project that more than 2.7 billion people use at least one of its “Family of services” every month.

Facebook is projected to grab just over 22% of total U.S. digital ad revenue in 2019, up from last year and behind only Google’s GOOGL 37%, according to eMarketer. FB has also tried to expand its business into video content in a streaming TV market that will soon feature Apple AAPL and Disney DIS, and its virtual reality business could prove to be a winner down the road. Meanwhile, Facebook Marketplace now competes against eBay EBAY, Amazon AMZN, and other online markets. 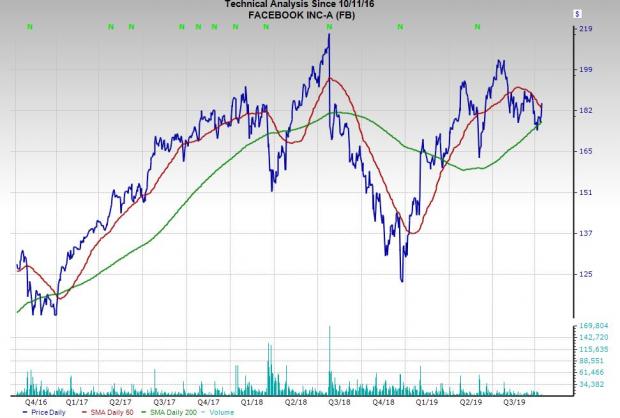 Facebook still isn’t out of the woods when it comes to governmental scrutiny even though it paid a historic $5 billion Federal Trade Commission fine earlier this year. The company currently faces broader antitrust reviews as part of a larger U.S. government probe into tech.

More concretely, Zuckerberg will appear in front of the House Financial Services Committee on October 23 to discuss Facebook’s plan to dive into cryptocurrency, which many regulators are against.

Zuckerberg and Facebook in June introduced plans for a blockchain-based cryptocurrency known as Libra. The company is expected to work with credit card and payment industry giants like Mastercard MA. However, PayPal PYPL recently backed out of the joint venture and reports suggest many more are now on the fence.

Moving on, shares of Facebook have jumped over 7% since the start of October in a sign that Wall Street might expect big things from the company’s upcoming earnings results. Investors will see in the chart above that FB stock is currently trading above both its 50 and 200-day moving averages.

Despite the recent surge, Facebook stock closed regular trading Friday at $184.19 a share, down approximately 11.5% from its 52-week highs, which could give the stock even more room to run heading into earnings.

Meanwhile, Facebook’s valuation picture appears solid at the moment, trading at 19.6X forward 12-month Zacks Consensus earnings estimates. This represents a discount against its industry’s 26.9X average and its own three-year median of 23.5X and 35.5X high. FB’s forward price/sales ratio of 6.3 also comes in well below Facebook’s three-year median of 8.9.

It is important to note that both these estimates would represent Facebook’s slowest sales growth as a public firm. For example, FB’s 2018 sales jumped over 37%, with 2017 up 47%, and 2016 up 54%. But Wall Street and traders have seen this slowdown coming and clearly accepted it, as no company can churn out that kind of growth forever.

At the bottom end of the income statement, FB’s adjusted Q3 earnings are projected to pop 8.5% to reach $1.91 per share. Still, Facebook’s full-year EPS figure is expected to fall nearly 16% as it spends to improve security, expand, and more.

Peeking ahead, Facebook’s fiscal 2020 earnings are expected to soar over 49% above our 2019 projection. FB’s Q3, Q4, and fiscal 2020 estimates also climbed significantly after the company posted its second-quarter results.

Facebook’s positive earnings estimate revision activity helps the company hold a Zacks Rank #2 (Buy) at the moment. Based on all we have discussed, Facebook seems like a stock some investors might want to consider buying at the moment, with the only major worry being the ongoing possibility of government intervention.

Facebook is set to report its Q3 2019 financial results on October 30.

Tesla's (TSLA) Rally Could Be An Opportunity