Additionally, customers can browse, buy or rent more than 100,000 movies and TV shows. They can also continue to watch all the shows and movies they have previously purchased from iTunes.

Moreover, Roku announced that the iPhone maker’s upcoming streaming service Apple TV+ will be available on the Apple TV app on its devices beginning Nov 1. This is expected to intensify competition in the streaming market, which is currently dominated by Netflix NFLX. 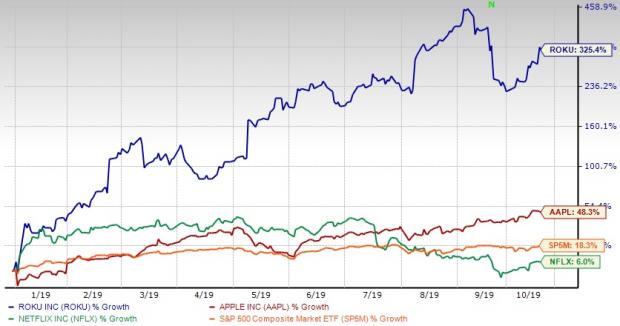 Although the price performance was muted for the iPhone maker, we believe the latest development to help Apple TV and Apple TV+ services to reach a wider audience.

In fact, Apple has been embracing platforms offered by Roku, Amazon and Samsung to cater to a wider consumer base that does not use its devices. The expansion bodes well for its subscription-based services like Apple TV and Apple Music, which forms a major part of Apple’s services portfolio.

Notably, the company is increasingly relying on its services segment for growth as the iPhone category is facing increasing competition from Chinese smartphone vendors.

Roku, in the meanwhile, is facing significant competition in the streaming market not only from incumbents like Netflix, Amazon, Hulu and HBO but also from Facebook and Comcast CMCSA.

Notably, Comcast’s plan to offer Internet users a free streaming media set-top box compatible with other services and Facebook’s Portal TV announcement have been a dampener for Roku in recent times.

The availability of Apple TV+ on Roku devices will make Apple a strong contender in the streaming market.

Meanwhile, Roku is expanding its streaming player lineup in Canada, the U.K., the Republic of Ireland and select countries in Latin America.

Moreover, Apple’s robust original content portfolio for Apple TV+ that includes shows of different genres like See, The Morning Show, Dickinson, For All Mankind and The Elephant Queen is a key catalyst.