Twitter (TWTR - Free Report) stock has surged roughly 40% in 2019 to fall just behind Facebook’s (FB - Free Report) 45%. Despite the run of success, Twitter shares remain an enigma to many on Wall Street.

Twitter is an invaluable platform that helps journalists, companies, and anyone in between spread information instantly. The social media company has also expanded its digital video business in recent years as it grabs live streaming TV rights in the Netflix (NFLX - Free Report) age. In fact, Twitter landed the streaming rights to the NFL’s Thursday Night Football the year before Amazon (AMZN - Free Report) .

Twitter has also been able to grow its advertising business in recent years. But it has found it somewhat difficult to expand its user base on a consistent basis and the growth of Instagram and other platforms such as Snapchat (SNAP - Free Report) have made things harder. With that said, Twitter’s average Monetizable Daily Active Usage climbed 14% last quarter to 139 million.

President Trump’s favorite form of communication might jump to the forefront as the 2020 election cycle heats up. It is also worth remembering that Twitter has spent heavily to clean up its platform of bots. “We also continued our work to proactively identify and address malicious behavior, resulting in an 18% drop in reports of spammy or suspicious behavior across all Tweet detail pages, which show the replies to any given Tweet on our service,” CEO Jack Dorsey, who also runs Square (SQ - Free Report) , said in prepared remarks last quarter.

“In addition, we continued to leverage machine learning to deliver more relevant content, driving increased usage of Twitter on a daily basis.” 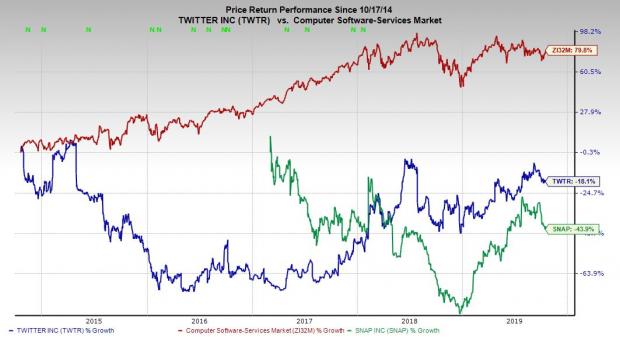 As investors can see, shares of Twitter are down 18% over the last five years, against its industry’s 80% average climb. With that said, TWTR stock has skyrocketed 140% in the last three years to crush the Computer Software-Services Market’s 41% expansion and Facebook’s 50%.

Much of this growth has come over the past 24 months. Still, Twitter stock closed regular trading Wednesday at $39.91 per share, 13% below its 52-week highs. This could give the stock room to run if it is able to impress Wall Street.

Twitter is also now trading at a relatively reasonable forward earnings multiple. TWTR is trading at 38X forward 12-month Zacks Consensus earnings estimates, which comes in above its industry’s 27.7X average but far below its own one-year median of 60.7X and its 12-month high of 93.7X.

Looking ahead, our current Zacks Consensus Estimates call for Twitter’s third-quarter revenue to climb 15.6% to hit $876.26 million. This would, however, mark a slowdown compared to Q2 and Q1’s 18% sales growth. Plus, Twitter posted 21% or higher growth in all four quarters of 2018.

The social media company’s positive longer-term earnings revision trends help Twitter sport a Zacks Rank #2 (Buy) heading into the release of its Q3 fiscal 2019 financial results on Thursday, October 24. TWTR has also crushed our quarterly earnings estimates by an average of 34% in the trailing four periods.

Therefore, those who can handle the inherent risk of buying stocks around earnings might want to consider Twitter stock, especially since it sits below its recent highs (also read: Solid Start to Q3 Earnings Season). 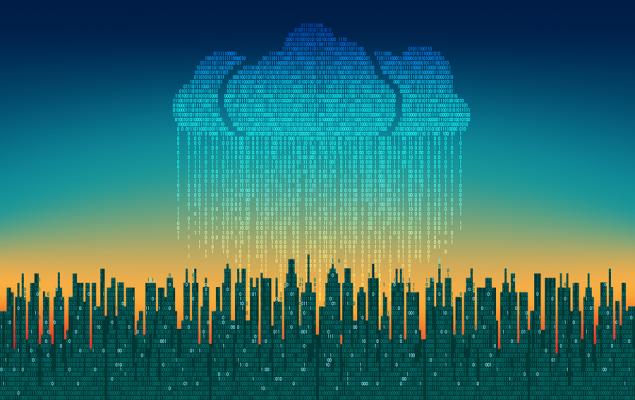 Rain In the Cloud Markets May Have Created Buying Opportunity