Steel Dynamics, Inc. STLD logged net income of $151 million or 69 cents per share in third-quarter 2019, down from $398.4 million or $1.69 in the year-ago quarter. Also, earnings trailed the Zacks Consensus Estimate of 70 cents.

The company witnessed a decline in average steel pricing during the third quarter.

The company generated cash flow from operations of $444.2 million in the quarter, up roughly 5.7% year over year.

The company also repurchased shares worth $115 million and paid out $53 million in dividends during the third quarter.

Considering domestic steel demand fundamentals, Steel Dynamics is optimistic regarding the 2020 North American steel market dynamics. The company believes that the North American steel consumption will experience modest growth. This is likely to be supported by the end of steel inventory destocking and further steel import reductions.

The company expects current trade actions to have a favorable impact in further lowering unfairly traded steel imports into the United States.

Steel Dynamics is positive about its Sinton, TX-based flat roll steel mill project as well as the related long-term value it will create through its value-added products and geographic diversification.

Shares of Steel Dynamics have lost 28.9% in the past year compared with the industry’s 30.9% decline. 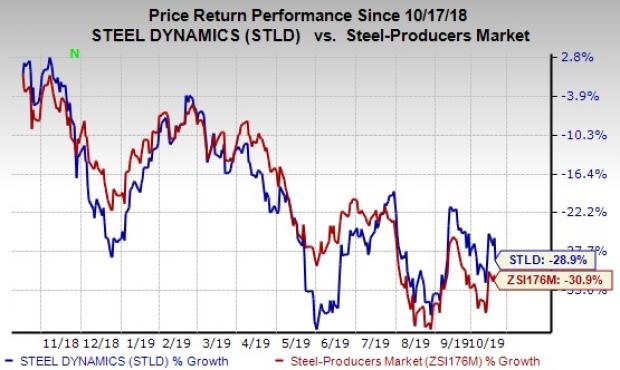 Agnico Eagle has an estimated earnings growth rate of 158.6% for the current year. Its shares have moved up 42.2% in the past year.

Here Are 3 Factors That Make Guess? (GES) a Promising Pick