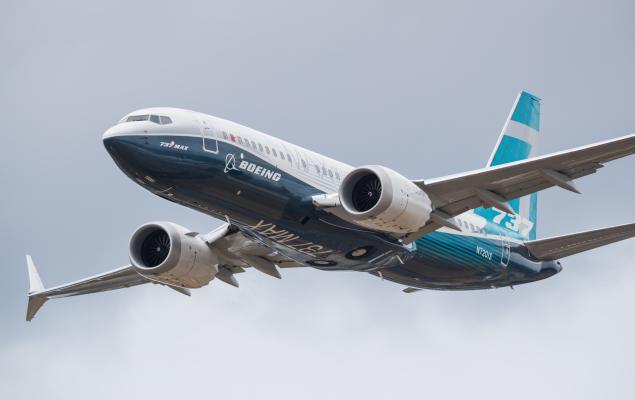 The Boeing Company (BA - Free Report) is set to release third-quarter 2019 results on Oct 23, before the opening bell. Lower delivery volumes for the company’s 737 Max product line are expected to have impacted the bottom line in the to-be-reported quarter.

Let's take a detailed look at the factors likely to have influenced Boeing’s performance in the third quarter.

Once considered a key growth catalyst for Boeing’s top line, the 737 Max product line has been weighing heavily on the company following the crashes in Indonesia and Ethiopia, which resulted in grounding of the fleet in March. Since then, Boeing’s commercial business has been struggling.

In April, Boeing lowered this fleet’s production from 52 to 42 aircraft per month, while in June, Federal Aviation Administration (FAA) identified another potential safety issue with these jets. Meanwhile, a dispute between European regulators and FAA over the re-certification of 737 Max all the more jeopardized the return of this fleet to service.

Moreover, Boeing lost a deal to its rival Airbus, after Saudi Arabian carrier Flyadeal made a commitment to buy 30 A320 Neo jets in July, with options to acquire another 20 jets. The declaration replaced Flyadeal’s $5.9 billion-agreement with Boeing for 50 737 Max 8 jets last December.

No doubt, this dealt another blow to Boeing’s commercial business. The upcoming quarterly results can be expected to duly reflect these developments.

Boeing’s third-quarter deliveries reflected a massive 201.6% year-over-year plunge in commercial shipments. In particular, the aircraft giant delivered only five of its flagship 737 jets, reflecting 96.4% decline from the prior-year quarter’s figure. This dragged down the overall delivery figures.

Such production cuts and lower delivery volumes might have weighed on the performance of Boeing’s commercial business in the current reporting cycle. The Zacks Consensus Estimate for the company’s commercial revenues in the third quarter is pegged at $8.57 billion, suggesting 43.9% decline from the prior-year reported number.

Moreover, since the majority of airlines have delayed their deliveries of the 737 product line, the company is incurring cost for storage of the completed aircraft. Further, at the onset of the third quarter, Boeing pledged to pay $100 million to support families and communities affected by the dual crashes, which is likely to have pushed up the company’s expenses, thereby impacting its bottom line.

The Zacks Consensus Estimate for the commercial unit’s third-quarter earnings implies a massive 74.1% decline from the year-earlier reported figure.

Cash Flow to Take a Hit

Lower delivery payments due to fewer 737 deliveries combined with building and storing 737 aircraft are expected to have weighed on Boeing’s operating cash in the to-be-reported quarter. This is likely to get reflected in the company’s third-quarter balance sheet.

Our proven model predicts an earnings beat for Boeing this time around. The combination of a positive Earnings ESP and a Zacks Rank #1 (Strong Buy), 2 (Buy) or 3 (Hold) increases the chances of an earnings beat. You can uncover the best stocks to buy or sell before they’re reported with our Earnings ESP Filter.

Here are some other defense companies you may want to consider, which also have the right combination of elements to post an earnings beat this quarter:

Huntington Ingalls Industries, Inc. (HII - Free Report) is scheduled to report third-quarter 2019 results on Nov 7. The company has an Earnings ESP of +2.14% and a Zacks Rank #3.

Leidos Holdings, Inc. (LDOS - Free Report) is set to report third-quarter 2019 results on Oct 29. The company has an Earnings ESP of +1.52% and a Zacks Rank #2. You can see the complete list of today’s Zacks #1 Rank stocks here.

What's in the Offing for Lam Research's (LRCX) Q1 Earnings?