A prudent investment decision involves picking of stocks with solid prospects and selling those that carry risks. At times, it is rational to retain certain stocks that have enough potential but are weighed down by tough market conditions.

Here we focus on EQT Corporation (EQT - Free Report) , which is expected to register solid growth in the near future. Notably, the natural gas production company did not miss the Zacks Consensus Estimate for earnings in the trailing four quarters, with the average positive surprise being 88.3%. Moreover, it has an expected earnings growth rate of 10% for the next five years. 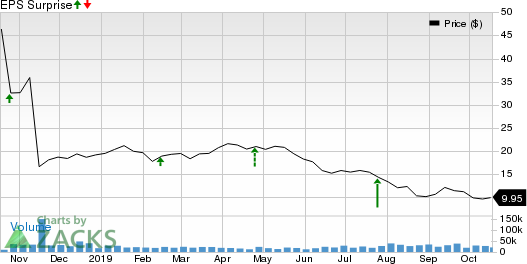 The company has a huge inventory of drilling locations in the core Appalachian Basin that could provide output to the explorer for the next 15-20 years. Notably, the company expects its premium asset base to contribute nearly $3 billion to adjusted free cash flow over the next five years.

EQT Corp, which has strong financials, successfully lowered net debt by $539 million through first-half 2019. Notably, the company’s balance sheet is significantly less levered than the industry it belongs to.

Moreover, in terms of the EV/EBITDA ratio — one of the best multiples for valuing oil and gas companies because energy firms have a large amount of debt and EV (Enterprise Value) including debt for valuing company or industry — EQT Corp seems undervalued. The company currently has a trailing 12-month EV/EBITDA ratio of 3.1, below the broader industry average of 6.2.

There are a few factors that are holding back the stock from reaching its true potential.

The pricing scenario of natural gas has worsened since the beginning of 2019. Being a leading natural gas producer, the weak commodity price is hurting the company’s business.

The pipeline bottleneck problem in the Appalachian basin has created a barrier for the upstream energy player, preventing it from transporting more of its produced natural gas to the key markets.

Moreover, the company’s lack of geographic diversification is concerning, since its entire asset base is located in the Appalachian Basin. As such, it is more vulnerable to basin-specific delays and interruptions in production from wells, which can potentially hamper growth.

Despite significant prospects, low gas prices and rising costs are affecting the company. Nevertheless, we believe that systematic and strategic plan of action will drive its long-term growth.

Matrix Service’s 2019 earnings per share are expected to rise 58.4% year over year.