The company delivered better-than-expected results in three of the last four quarters while lagging estimates in one. Average earnings surprise was a positive 19.53%. Notably, in the last reported quarter, its earnings of $2.46 per share surpassed the Zacks Consensus Estimate of $1.70 by 44.71%.

In the past three months, shares of Unifirst have gained 4.5% compared with the industry’s growth of 4%. 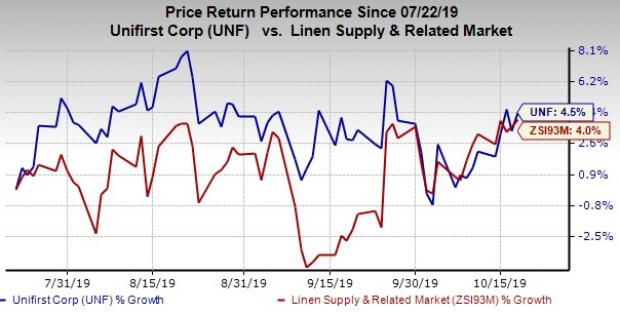 Let us see how things are shaping up for Unifirst this earnings season.

The textile and uniform service provider firmly believes in improving its technologies, building solid management team and upgrading service offerings. Investments made on these objectives will likely be reflected in its fourth-quarter fiscal 2019 numbers.

Moreover, moderation in merchandise costs, fluctuations in health care claims and payroll expenses, and normalization of certain expenses, which had aided fiscal third-quarter results, might have had influenced Unifirst’s performance in the fourth quarter.

For Core Laundry Operations, improved customer retention and solid new account sales, which contributed to organic sales growth in the fiscal third quarter, might have continued in the fourth quarter as well. However, woes related to timing of certain pricing adjustments might get reflected in the segment’s top-line numbers.

Unifirst expects organic sales growth of roughly 3% for Core Laundry Operations for the fourth quarter. This is lower than 5.8% organic sales growth recorded in the fiscal third quarter. The Zacks Consensus Estimate for the segment’s fourth-quarter sales is pegged at $434 million, indicating a 10.7% increase from the year-ago reported figure.

Our proven model doesn’t conclusively predict an earnings beat for Unifirst this time around. The combination of a positive Earnings ESP and a Zacks Rank #1 (Strong Buy), 2 (Buy) or 3 (Hold) increases the odds of an earnings beat. But that’s not the case here. You can uncover the best stocks to buy or sell before they’re reported with our Earnings ESP Filter.

Earnings ESP: Unifirst has an Earnings ESP of 0.00% as both the Most Accurate Estimate and the Zacks Consensus Estimate are pegged at $1.96.

Here are some companies that you may want to consider as these have the right combination of elements to post an earnings beat this season, according to our model.

Shaw Communications Inc. (SJR - Free Report) presently has a Zacks Rank #3 and an Earnings ESP of +3.77% for fourth quarter fiscal 2019 (ended August 2019) and a Zacks Rank #3. You can see the complete list of today’s Zacks #1 Rank stocks here.

Is Royal Bank of Scotland (RBS) A Good Pick for Value Investors?