The San Francisco-based company’s solid quarter came roughly a week after its co-founders said at a Wall Street Journal tech conference that Lyft would make money on an adjusted EBITDA basis in Q4 of 2021. The somewhat surprising announcement, just days ahead of its official Q3 release, helped boost LYFT stock.

Uber, like Lyft, has struggled since going public earlier this year. The much-hyped ride-sharing company, which compared itself to Amazon (AMZN - Free Report) and other tech titans in the run-up to its IPO has seen its losses grow as it races to expand its business amid heightened price wars against its chief rival and smaller competitors.

Last quarter, Uber’s adjusted loss ballooned from $292 million to $656 million. Luckily, Uber’s Monthly Active Platform Consumers jumped 30% to 99 million, with trips up 35%. However, second-quarter revenue only grew by 14%, its smallest quarterly increase on record—Q2 2018 revenue soared 53%. Uber continues to offer a larger amount of rider subsidies and it pays a large amount of its gross booking fees to drivers.

Meanwhile, the company has found it much harder to succeeded in markets such as Latin America (where Q2 sales slipped 24%) and China, which Uber had hoped would prove to be vital growth hubs for the decade-old firm. Uber has also tried to convince Wall Street and investors to focus on its broader portfolio, far beyond ride-sharing and Grubhub (GRUB - Free Report) -competitor Uber Eats, to its slow push into freight, healthcare-based travel, air transportation, and more. 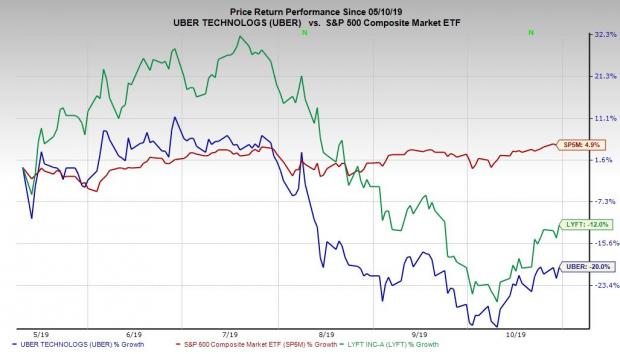 The firm wants to be the Uber of everything for transportation. The company’s longer-term goal is to shuttle people around in autonomous vehicles and hopes consumers transition further away from car ownership as more people live in crowded cities than ever.

But profitability concerns remain at the forefront for many concerned investors right now. “We believe the profitability of the rides business will prove out,” CEO Dara Khosrowshahi said on Uber’s conference call last quarter.

“In fact, in the second quarter, if we take our rides contribution and deduct all of the corporate overhead, which includes the unallocated expenses and tech support in the entire company excluding ATG, the loss would have been approximately $100 million in the quarter.”

Peeking even further ahead, Uber’s fiscal 2020 sales are expected to surge 35% above our current-year estimate to reach $19.08 billion.

Uber is still projected to report an adjusted quarterly loss of -$0.83 per share in Q3 and a full-year loss of -$7.07. With that said, the company’s adjusted FY20 EPS figure is projected to come in at just -$3.10 per share. It is worth noting, however, that Uber came up well short of our quarterly estimates in Q2.

As we can see in the chart above, Uber stock is down big since going public in May 2019. With that said, shares of Uber have bounced back over the last month. Despite the recent climb, Uber stock closed regular trading Wednesday down roughly 28% from its 52-week highs at $33.75 per share.

Therefore, Uber stock does have plenty of room to run. And it’s not too hard to imagine the stock climbing if the company posts better-than-projected results or provides upbeat guidance, especially with so many investors clamoring for signs of hope. Plus, Khosrowshahi has said he expects 2019 to be the year Uber posts its largest losses.

Interested investors should make sure to pay attention to any updates on the firm’s new legal battle in California over whether gig economy workers should be considered employees. Uber is set to release its Q3 results after the closing bell on Monday, November 4.