CF Industries Holdings, Inc. (CF - Free Report) delivered profits of $65 million or 29 cents per share in the third quarter of 2019, up from $30 million or 13 cents in the year-ago quarter. However, earnings per share missed the Zacks Consensus Estimate of 34 cents.

Net sales inched down 0.2% year over year to $1,038 million in the quarter. The figure also lagged the Zacks Consensus Estimate of $1,069.4 million.

Sales in the Granular Urea segment declined roughly 7.4% year over year to $327 million. Sales volumes fell around 12% year over year to 1,200,000 tons. Lower volumes as a result of planned maintenance activities impacted performance in the reported quarter. Average selling prices for granular urea rose 5.4% year over year to $273 per ton mainly due to a tighter nitrogen demand and supply balance.

Cash flow from operation was $510 million, down 20.9% year over year. The company repurchased roughly 1.5 million shares during the reported quarter.

CF Industries is optimistic about the nitrogen fertilizer industry and expects fundamental factors to continue improving in the near and the long term as the global market continues to tighten.

The company expects demand from import-dependent regions to support global pricing in the near term. In North America, corn crop futures are expected to support higher planted corn acres over the next two seasons. Also, demand for urea from Brazil and India continues to be favorable.

Global demand growth for nitrogen is expected to outpace net capacity additions over the next four years. The company expects net Chinese-produced urea exports in the range of 1-3 million metric tons per year. Over this period, CF Industries expect North American producers to continue to benefit from access to low-cost North American natural gas.

Shares of CF Industries have lost 2.1% in the past year compared with the industry’s 13.6% decline. 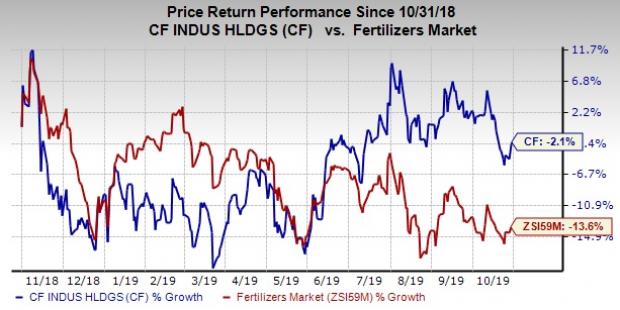 Kirkland Lake Gold has an estimated earnings growth rate of 93.4% for the current year. Its shares have moved up 130.7% in the past year.