Disney Earnings Preview: What's Next for DIS Stock in the Streaming TV Era

Disney (DIS - Free Report) is set to release its fourth-quarter fiscal 2019 financial results after the closing bell on Thursday, November 7 and launch its streaming TV platform just five days later. So, let’s see what to expect from Disney’s quarterly results and evaluate DIS stock, which is down roughly 9% in the last three months.

Disney is set to officially enter the streaming TV fray on November 12, with the launch of Disney+. The historic entertainment conglomerate has been preparing for this for some time now through its deals with streaming technology firm BAMTech and its $71.3 billion deal to acquire key 21st Century Fox assets.

Some might even argue that Disney acquired Marvel and Lucasfilm, in 2009 and 2012, respectively, in anticipation. No matter what, these two entities have helped Disney pull in records at the box office in recent years, and will play vital roles in the company’s ability to offer a more complete streaming TV service to better compete alongside Netflix (NFLX - Free Report) , Amazon (AMZN - Free Report) Prime Video, and others.

Disney+ will cost $6.99 per month and grant users access to old and new content from its namesake brand, Pixar, Marvel, Star Wars, National Geographic, and much more, bolstered by its Fox deal. The company is also set to offer consumers the chance to bundle Disney+, along with ESPN+, and ad-supported Hulu for $12.99 a month. 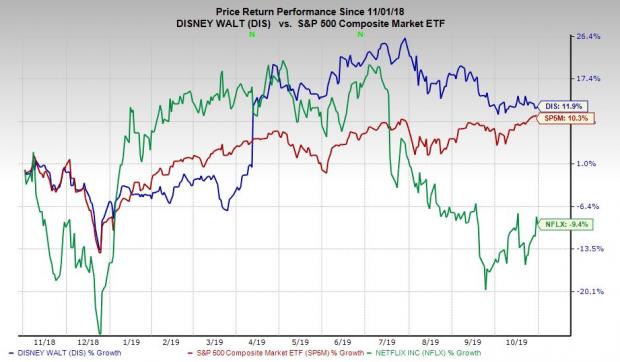 Netflix (NFLX - Free Report) is still by far the largest streaming TV company in the world. The company closed Q3 with 158.33 million paid subscribers, but it fell short of its own subscriber growth figures in back to back periods. Plus, NFLX will have to prove to users and Wall Street that its own original content is compelling enough as it prepares to lose many of its most popular shows to soon to be rivals.

This list includes Comcast (CMCSA - Free Report) and NBCUniversal’s Peacock streaming offering that is expected in the spring of 2020. On top of that, AT&T’s (T - Free Report) brand new HBO Max will launch in May 2020 at $14.99 a month, which is $1 less than Netflix’s most expensive plan.

Meanwhile, Amazon Prime Video costs $8.99 a month, while Prime members who pay $12.99 per month for shipping and shopping deals get the service included. On top of that, Apple TV+ (AAPL - Free Report) is set to launch on November 1 for $4.99 per month. The iPhone giant undercut all of its competitors to help entice consumers and justify its small content library.

Streaming TV will play a major role in Disney’s future as it becomes the norm amid an exodus from cable. Nonetheless, the company’s Media Networks unit, which includes cable and broadcast TV, made up 33% of revenue last quarter. Parks, Experiences, and Products accounted for a similar percentage, while Studio Entertainment pulled in nearly $4 billion for roughly 20% of Q3 sales.

Its newly-formed Direct-to-Consumer & International roughly matched its Studio division last quarter. Therefore, even as fans and investors focus on streaming, CEO Robert Iger and Wall Street understand that there is still much more to Disney. With that said, streaming could drive DIS stock for the foreseeable future, as Disney’s price chart above shows us.

Shares of Disney have now easily crushed NFLX over the last 12 months, up 12% against the current streaming king’s 9.5% decline. More specifically, DIS stock saw a massive spike directly after it provided a slew of Disney+ details during its April 11 Investor Day.

Disney’s recent climb has stretched its valuation picture somewhat. DIS is currently trading at 21.6X forward 12-month Zacks Consensus Earnings estimates. This comes in well above its industry’s 18.4X average and its own three-year median of 16.2X.

The stock is also trading above its three-year median in terms of forward sales. With this in mind, Disney has committed to spending heavily on its streaming push. And the company currently pays an annualized dividend of $1.76 per share, for a 1.36% yield.

Looking ahead, Disney’s Q4 fiscal 2019 revenue is projected to soar 33% to reach $19.03 billion, based on our Zacks Consensus Estimates. This estimate includes Disney’s Fox deal and its Hulu ownership, which were included for the first time last quarter, when revenue jumped 33%.

However, as we mentioned, Disney’s spending for the future is set to hit earnings now. The company’s adjusted Q4 earnings are projected to tumble 36% to $0.95 per share, with full-year fiscal 2019 expected to fall nearly 19%.

The company’s earnings are then expected to pop 3% above our 2019 estimates next year. Nonetheless, DIS has seen its earnings revision picture turn far worse recently.

Disney stock closed regular trading Thursday at $129.92 per share, down roughly 12% off its 52-week highs. DIS shares also currently rest below their 50-day moving average and just bounced up off their 200-day recently. This could give DIS stock room to run if it is able to impress Wall Street with better-than-expected results or guidance—not to mention a possible official streaming launch boost.

Interested investors should probably wait to see signs of an actual comeback before buying DIS. Still, Disney looks like a stock worth considering as a longer-term investment in the streaming TV age because its diverse offerings, which includes live sports and name brand content, might stand out in a crowded market.