Adjusted loss per share (barring one-time items) in the reported quarter was 27 cents. The Zacks Consensus Estimate for the quarter was pegged at breakeven.

Revenues declined around 37.7% year over year to $649.7 million in the quarter. However, it surpassed the Zacks Consensus Estimate of $632 million.

Adjusted EBITDA tumbled 69.3% year over year to $90 million. This resulted from a decrease in methanol prices, which was partly offset by higher sales volume of methanol produced by Methanex.

For the reported quarter, cash flow from operating activities was $71 million, down 68.9% year over year. The company had cash and cash equivalents of $857 million, up around 69.6% year over year.

Methanex returned $27 million to shareholders through regular dividend payouts during the third quarter.

The company anticipates its Geismar 3 plant to deliver strong returns on significant capital and operating cost advantages. Over the coming years, most of the large-scale capacity additions are anticipated to be in the Americas and the Middle East. Further, the company expects new non-integrated capacity additions in China to be modest on continuous restrictions by the government in China.

Shares of the company have lost 41.4% in the past year compared with the industry’s 27.8% decline. 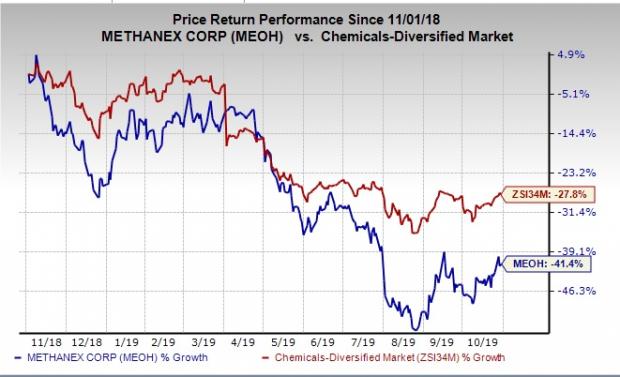 Kirkland Lake Gold has an estimated earnings growth rate of 93.4% for the current year. Its shares have moved up 132% in the past year.

Buy These 4 Stocks as Consumer Spending Rises in October