Jack Barnes, CEO and chairman of People's United noted, “The acquisition allows us to further optimize our existing branch footprint regionally to more efficiently serve our combined customers, and deliver our tailored solutions to additional markets, backed by our expert bankers and personalized technology."

After-Effects of the Deal

People's United expects this transaction to be accretive to earnings by 7 cents per share based on fully phased-in cost savings, in the upcoming period. Further, the tangible book value earn-back is anticipated to be approximately 2.3 years, and IRR is projected at roughly 18%.

The deal is anticipated to add assets worth $7.3 billion of United Bank, a full-service community financial services firm, to People's United. It will also help People's United solidify its presence in the Central Connecticut market and strengthen its franchise in Western Massachusetts. Also, the deal is likely to fortify the bank’s commercial and retail banking businesses.

People’s United continues to benefit from a healthy business portfolio that has grown inorganically over time. Since 2016, the company has maintained its acquisition spree, fortifying the bank’s footprint in various areas. Also, it has diversified its revenue sources, which are likely to keep supporting the bank’s financials. Further, it is expected to benefit from the improving market conditions in the domestic market.

Shares of this Zacks Rank #3 (Hold) company have rallied 9.3% over the past 3 months, outperforming the industry’s rise of 7.3%. You can see the complete list of today’s Zacks #1 (Strong Buy) Rank stocks here. 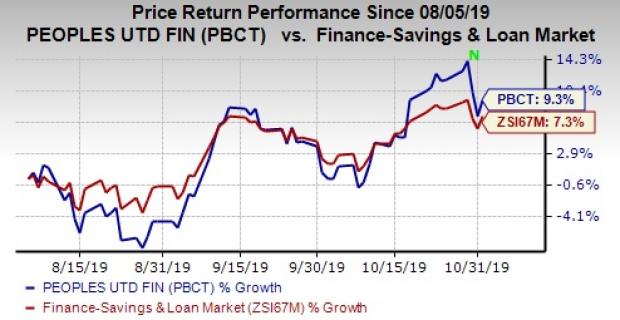 Similar to People’s United, some other financial institutions are also resorting to acquisitions in order to expand their footprint. Some of these companies include Ally Financial ALLY, LPL Financial Holdings Inc. LPLA, and Stifel Financial (SF - Free Report) .

What's in the Store for Fidelity National's (FIS) Q3 Earnings?