Ford (F - Free Report) and the United Auto Workers (UAW) recently reached a tentative four-year labor contract, which would create or maintain jobs, and involve billions in new investments by the U.S. auto biggie. With the General Motors’ (GM - Free Report) workers approving the proposed labor contract to end their 40-day strike, the UAW bargainers have used it as a template for negotiations with Ford as well. Notably, the union’s latest deal with Ford largely mirrors the UAW-General Motors contract, with certain exceptions.

The deal covers more than $6 billion of Ford's spending in jobs and plants. Under the new contract, more than 8,500 jobs will be created or retained, with 19 facilities receiving a portion of the investment money. The largest investment of $1.1 billion would be in Ford’s Michigan Assembly plant for the all-new Ford Bronco SUV and Ford Ranger mid-size pickup.

The Ford-UAW employees will receive a $9,000 and $3,500 ratification bonus for full-time and temporary workers, respectively. Wage increases of 3% in the second and fourth years, and 4% lump sums will be provided in alternate years, along with no reduction in healthcare benefits or increase in members' costs. The contract will also enable temporary workers to become full-time employees and offer a $60,000-retirement bonus for production workers.

The deal includes the closing of the Michigan engine plant, with more than 600 of its hourly workers getting job offers at the nearby Van Dyke transmission facility.

Approximately 55,000 rank-and-file members of UAW and Ford are expected to vote on the new contract over the next two weeks, in order to decide the fate of the contract on the basis of simple majority.

Ford’s shares have declined around 3.7% in the past three months compared with the roughly 11.5% rise recorded by the industry. 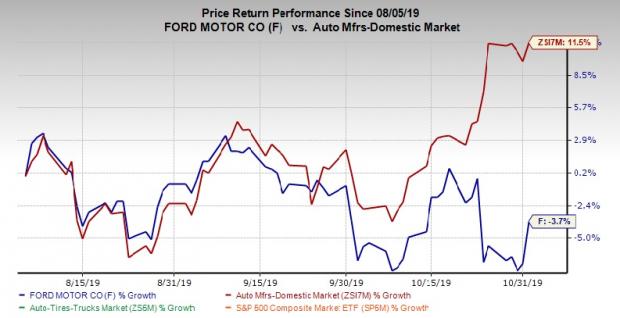 Solid vehicle mix, supported by F-series trucks and SUV models, including Escape, Explorer, Expedition, EcoSport and Edge, among others, all of which offer hybrid and electric options, will likely boost the company’s revenues in the upcoming quarters.

Spartan Motors has an estimated earnings growth rate of 54.17% for the ongoing year. The company’s shares have surged roughly 142.2% in a year’s time.

BRP has a projected earnings growth rate of 18.49% for the current year. Its shares have gained around 12.6% over the past year.